posted by Julie in Personal

Today is my 6th wedding anniversary.  My husband and I have been together for 11.5 years (more than a third of my life – I officially feel old), married for 6, and lived together for… well… not very much of that time at all.  In just over a month, he will be moving back, and for the first time in our entire engaged/married life, we will actually be residing in the same state, under the same roof, and not planning for one of us to shortly move away.  It’s like we’ll actually be a real married couple!  And see each other every day!  Every day. Every single day, for better or for worse.  Hmm… on second thought… maybe it’s time for me to start looking for a job a few hours away.

All kidding aside, it’s exciting to celebrate an anniversary and not worry about figuring out how to wind up in the same place.  My husband moved away shortly after our 1st anniversary, so it was very bittersweet.  Anniversaries 2, 3, and 4 were spent in a DC to Philly commute marriage, and were met with many frustrating feelings over not knowing when things would end.  We were back in the same place for our 5th anniversary, but once again, my husband was preparing to move.  Anniversary #6 marks the first time we’re both planning on being in the same place for an undetermined amount of time.  And even if it means eating a whole lot less of my beloved asparagus and zucchini, and spending far more time up to my elbows in e.coli handling raw meat, I sure am excited for the permanently cohabitating phase of our marriage (but between you and me, I’m going to miss letting the dog sleep in bed every night). 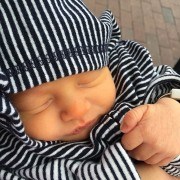 A Different Kind of Recipe