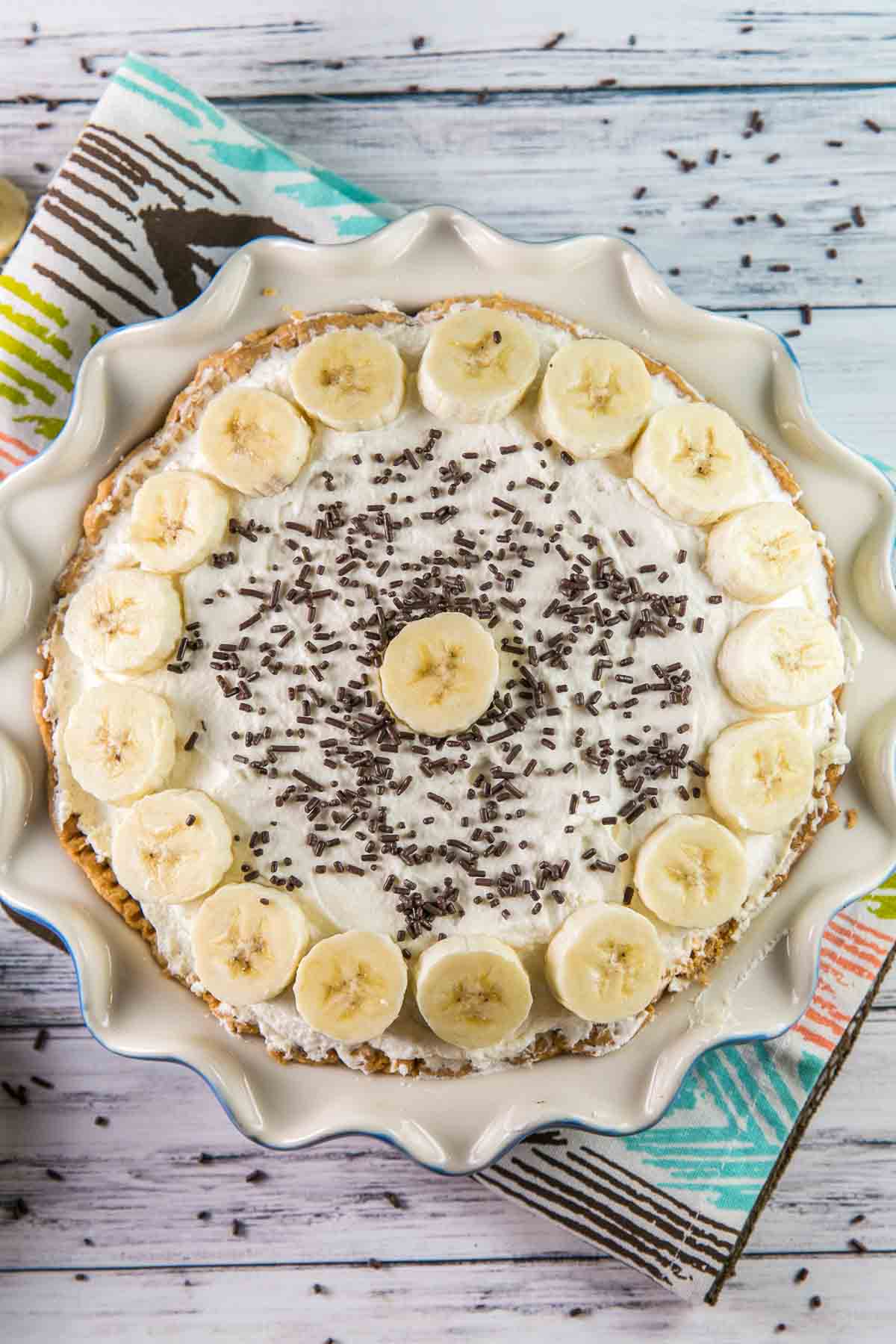 Saturday (03.14) is Pi Day, a celebration of all things Pi.  What kind of food blogging scientist would I be if I let Pi Day come and go without sharing a pie recipe, especially since I happen to own a pi-themed pie plate?

And even better, I managed to get my act together to make my pi(e) ahead of time so I can share the recipe with you in time for you to make your own! 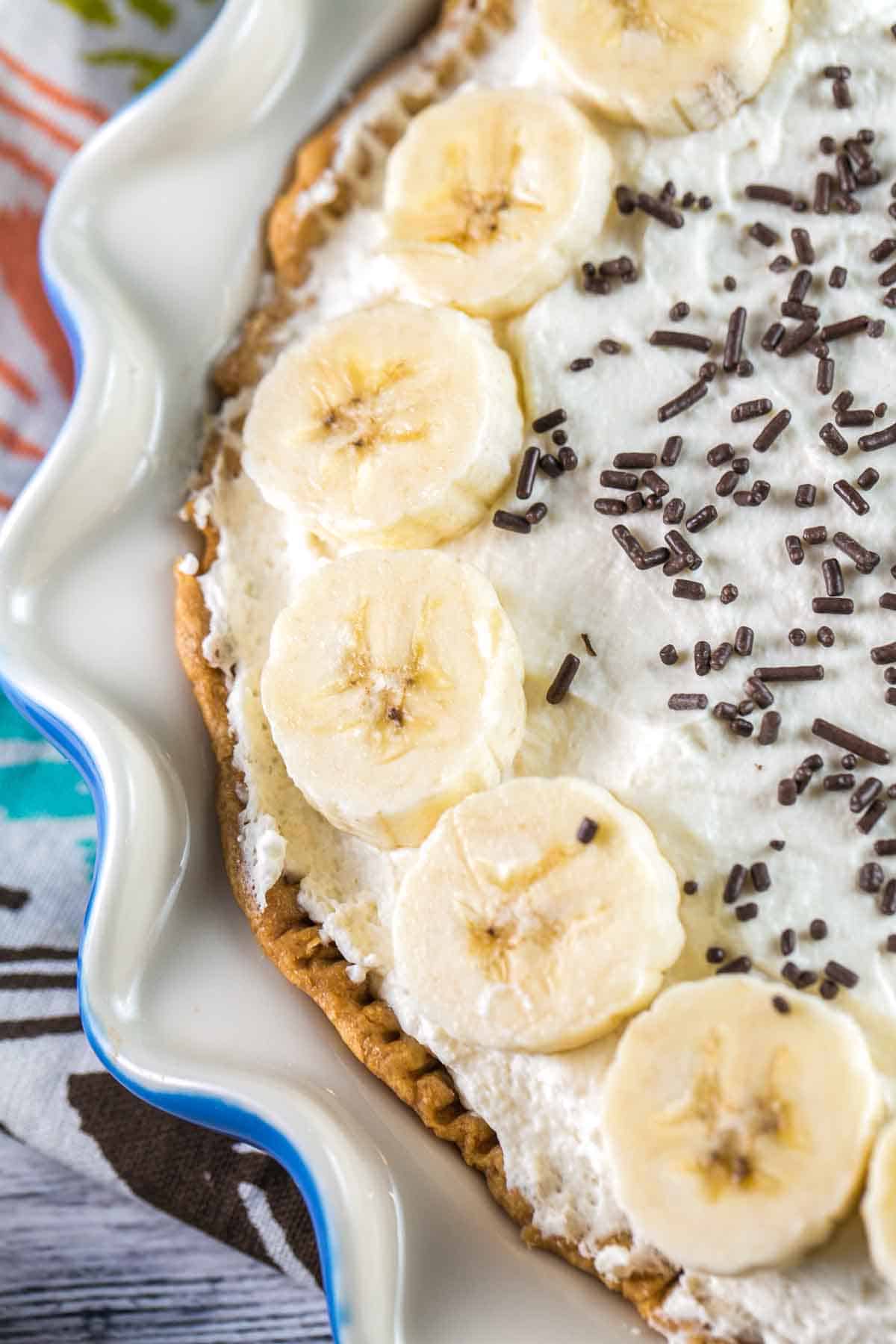 I’ve been dealing with some pretty significant insomnia for the past several months, and spent the wee hours of Sunday morning unable to sleep, running through pie ideas.  Nothing struck my fancy, however, so I turned to a search on Pinterest and there it was, waiting for me – a beautiful, sky-high, whipped cream topped banana cream pie.

I clicked on over, and found a pie recipe waiting consisting of a store-bought graham cracker crust, an instant pudding packet, and a giant tub of cool whip. 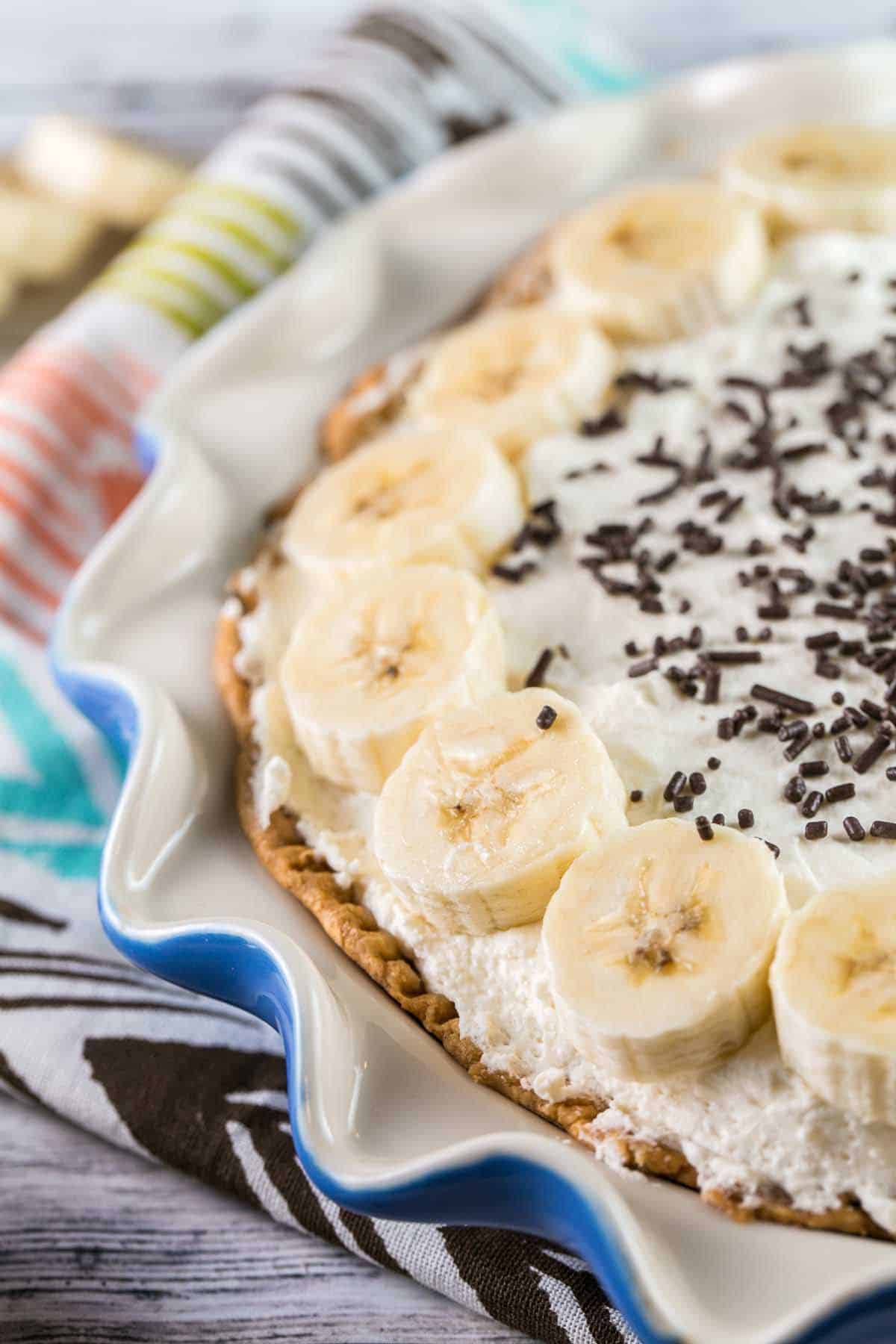 Now look, there is nothing wrong with the semi-homemade mentality – I’m actually a really big fan.

We all know those extremely obnoxious individuals who get all judgy-judgy if you use a box of cake mix (you know, the “yesterday I bought a box of cake mix and I’ve never been more embarrassed” or “whatever you do, don’t try to use a box mix to make this cake because you will ruin it!” type people), and they really make me roll my eyes.

I bake from scratch because I enjoy it – I like trying new things, changing a few things here or there and seeing what happens, and having control over each step.  Lots of people don’t enjoy the precision and find baking from a mix to be much more enjoyable. 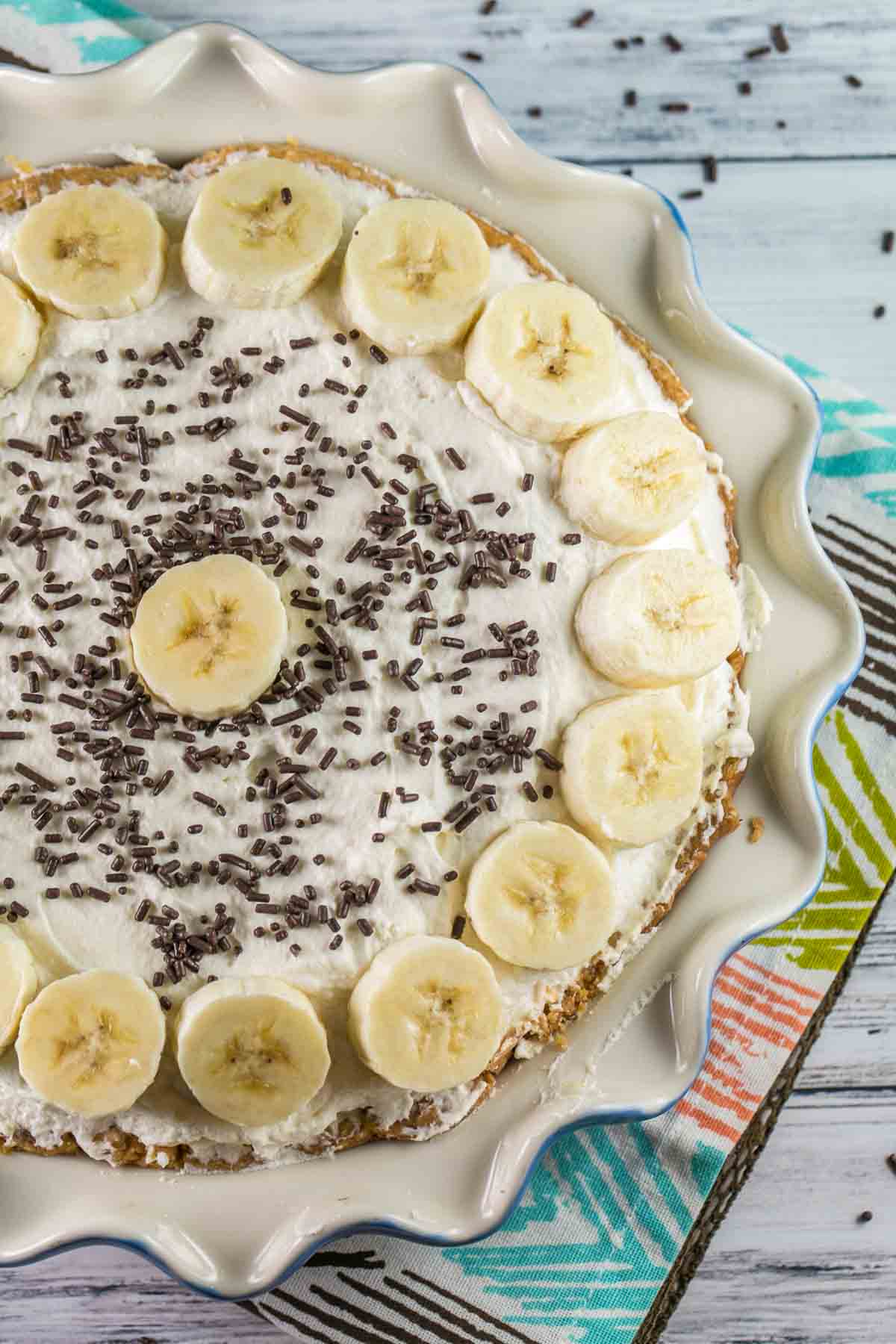 The way I see it, if I was willing to invest the time and trial-and-error mentality, I’m sure I could learn to cut my own hair, repair a car engine, or sew my own clothing.  But none of these things particularly interest me, and I’d much rather do things I enjoy with my limited free time than master a skill that someone else can do better.

I’m sure lots of people feel the same way about baking, and if it isn’t fun for you, why would you do it?  So if a banana cream pie with mostly store-bought ingredients is up your alley, more power to you – especially since Cool Whip is the single most delicious artificial thing in existence.

If you’re interested, this is the recipe that caught my eye visually, but I haven’t made it so I cannot vouch for the taste. 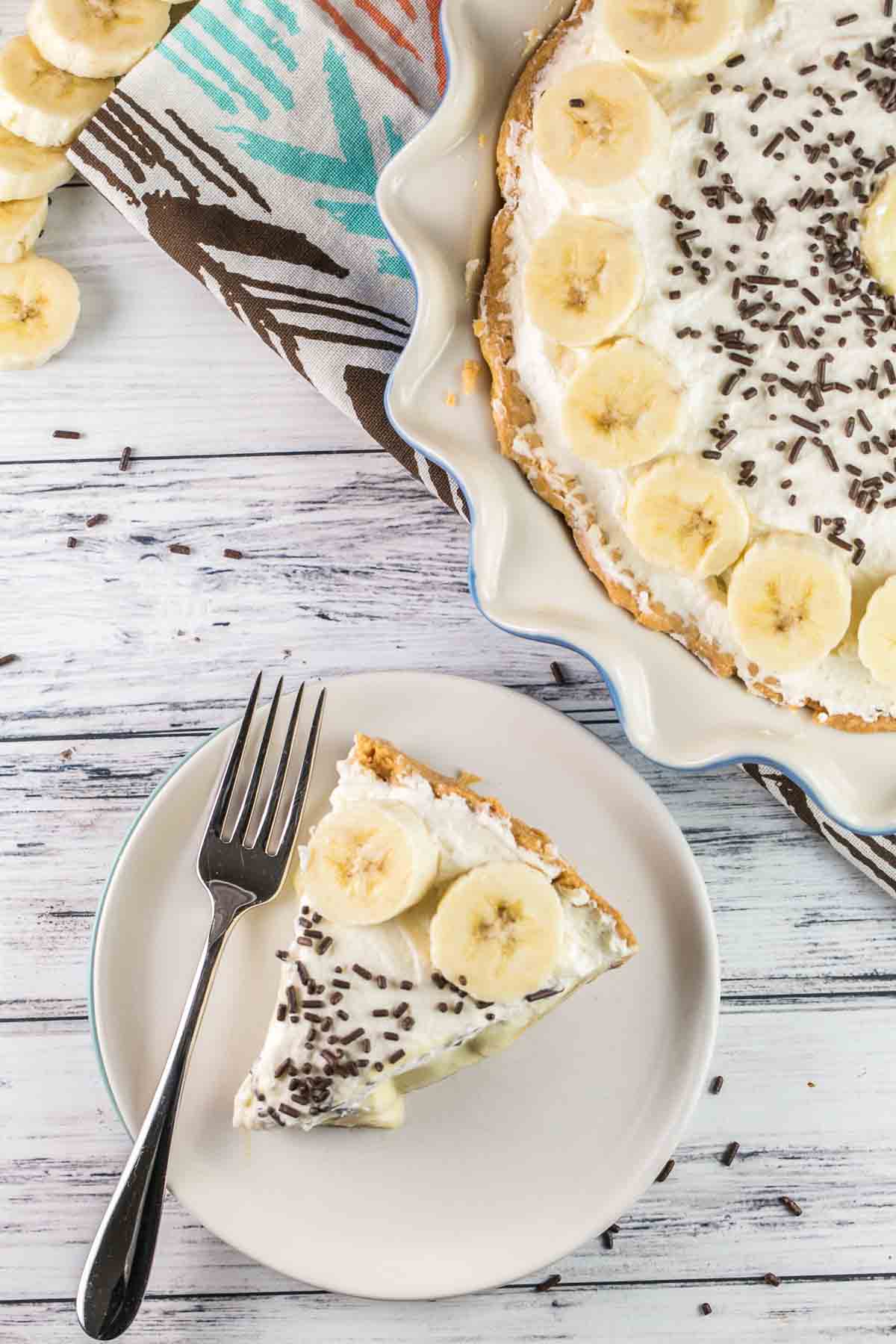 As for me, I like baking from scratch, and Pi Day surely seems like a worthy excuse to whip up (pun intended!) a batch of pastry cream for a homemade banana cream pie.

I turned to my favorite source for recipes, America’s Test Kitchen, and made a few changes along the way.  The pie really isn’t that much work (just arm yourself with a whisk and some time) and the end result is fantastic, so if you’re up for a homemade pie, I highly recommend giving this recipe a go.

I love that the banana flavor in the pastry cream comes from simmering the half-and-half with fresh bananas, instead of artificial-tasting banana extract, and tossing the banana slices in orange juice really helped to slow down any browning. 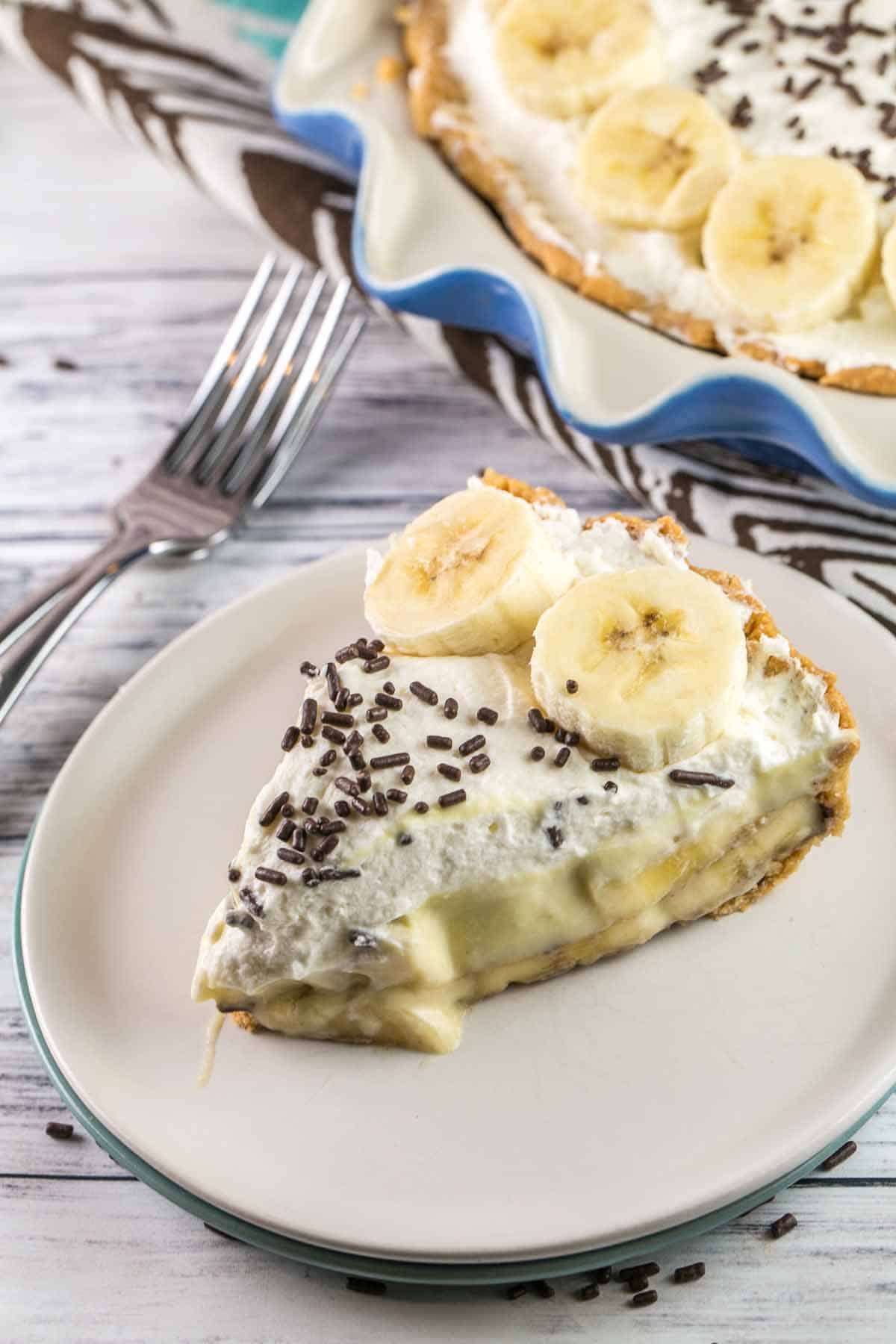 I added in a chocolate lining for the crust, both because chocolate pairs so well with bananas and because it helps to prevent the crust from getting soggy over a few days.

But while I may have my pie-making skills down, I still lack in the pie-cutting department – maybe that’s what I actually should have been searching for on Pinterest! 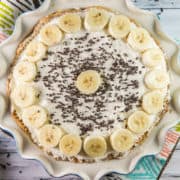