Why decide between chocolate or banana cream cheesecake when you can have both?  Rich, creamy layered cheesecake, with all the tips you need for a perfect cheesecake every time! 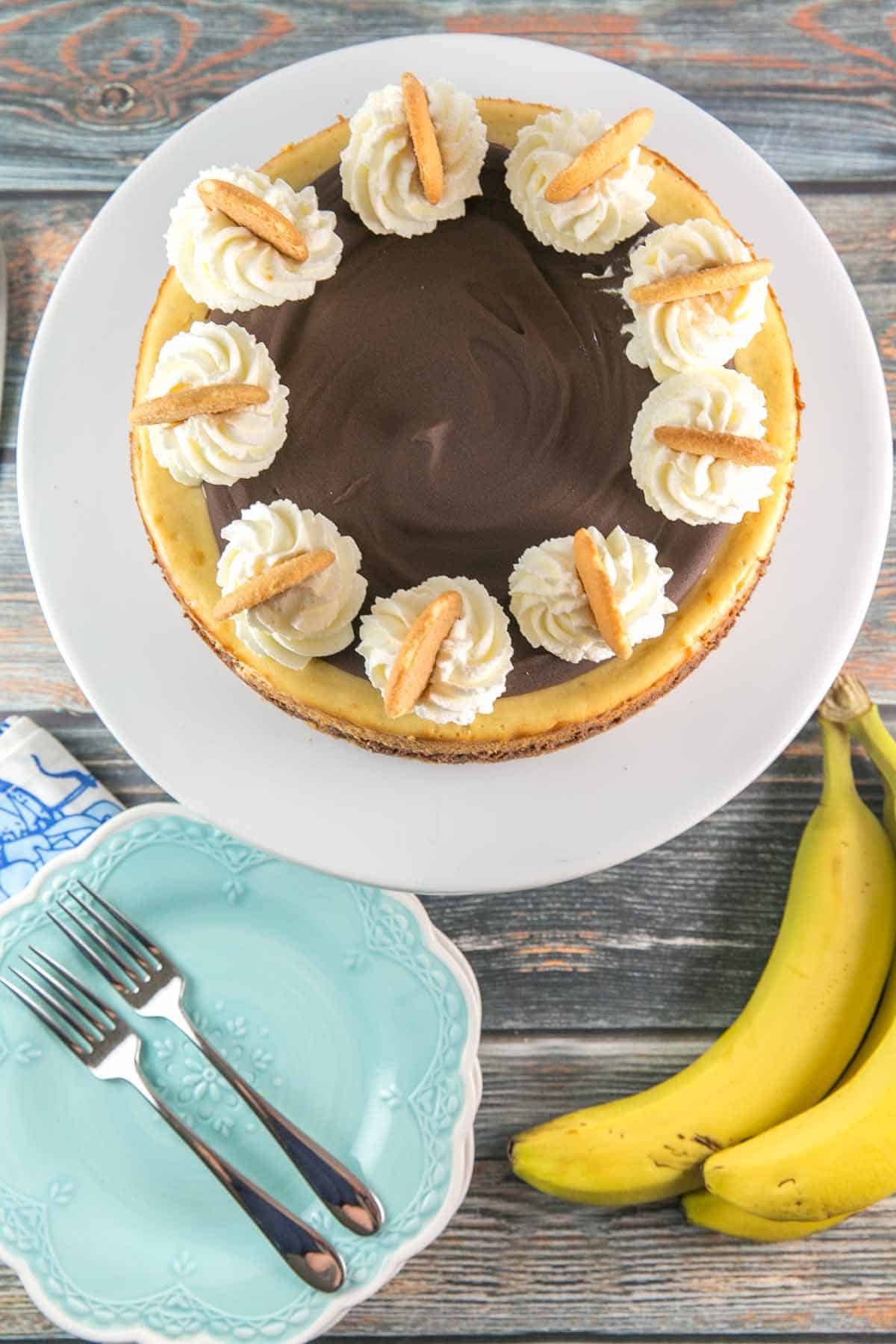 Either way, it means I have an annual opportunity to work on my cheesecake skills and try new flavors.

This year, he poured over cheesecake flavors offered at various bakeries, and settled on a chocolate banana cheesecake.  (He normally requests this dark chocolate cheesecake, so this wasn’t too big of a deviation from the norm.) 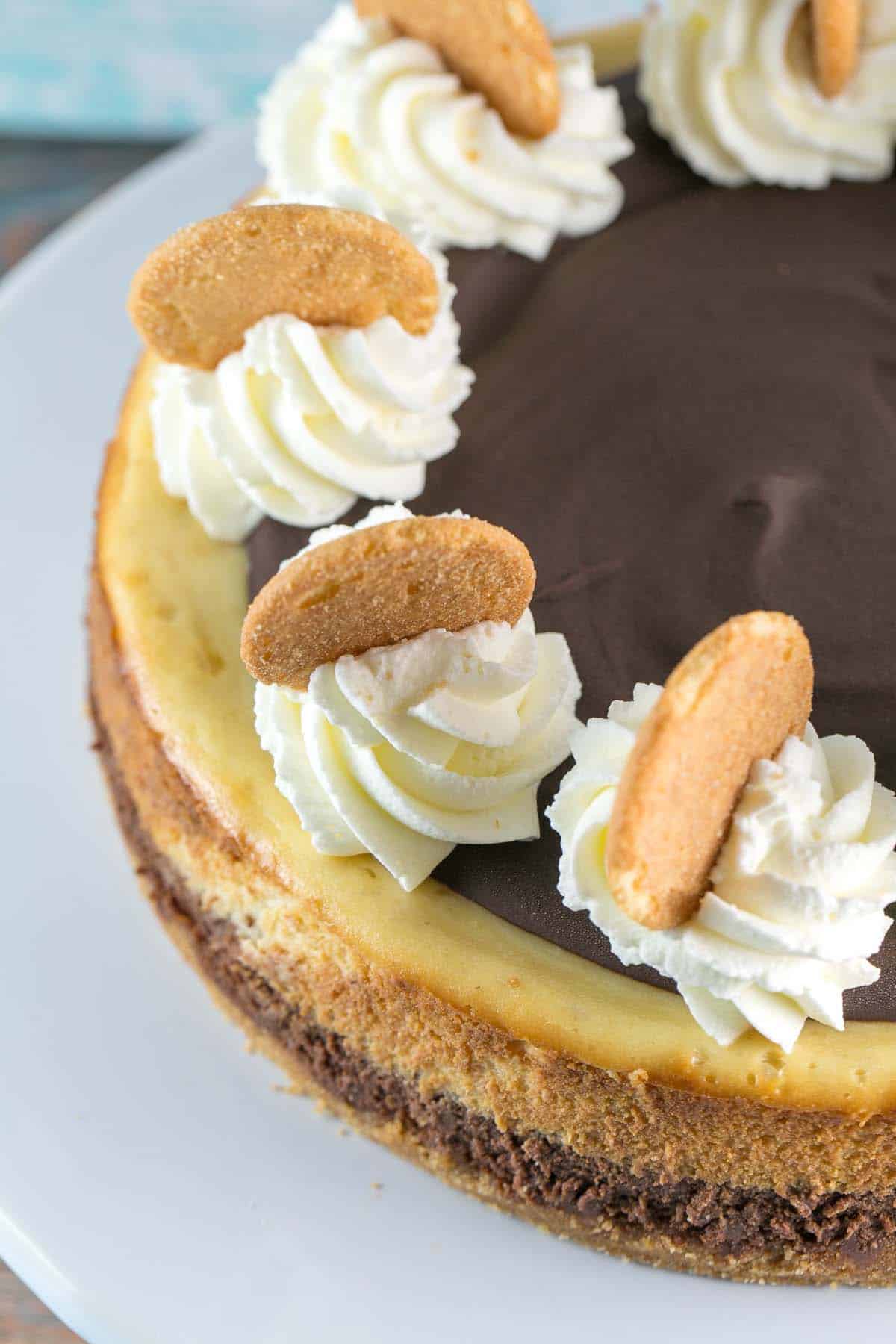 Cheesecake: With or Without Starch?

Before we get further into this particular chocolate banana cheesecake, let’s talk about the types of cheesecake for a minute.  There are two general styles for cheesecake: those with an added starch, and those without.  Time for my favorite subject… some kitchen chemistry!

A cheesecake made without starch generally contains just sugar, eggs, and cream cheese for the base (sometimes sour cream as well), which results in a super smooth and silky texture.  These cheesecakes are generally light and fluffy.

Since there is no added starch, this type of cheesecake relies on the eggs to set.  As the cheesecake is (gently!) heated, the egg proteins denature and link together, forming a solid.  Cooked too quickly, however, the proteins will tighten and curdle, forming clumps. 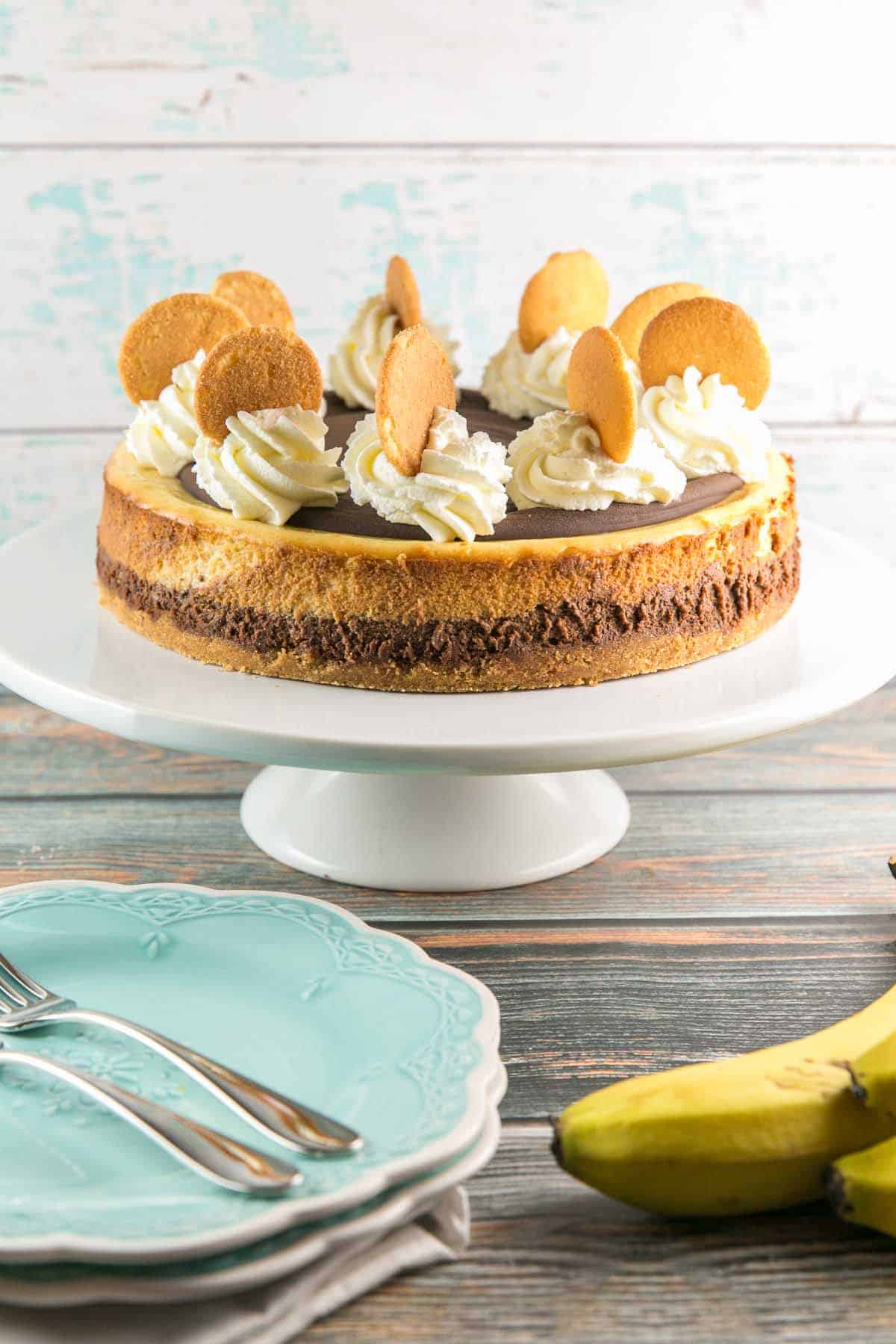 When you add a starch (like cornstarch or flour) to a cheesecake, the result is a little denser and heavier.  As the cheesecake heats, the starch molecules begin to absorb the liquid swell, a process known as gelatinization.

Cheesecakes made with starch can be cooked at a slightly higher temperature, because the gelatinization occurs before the eggs can curdle. 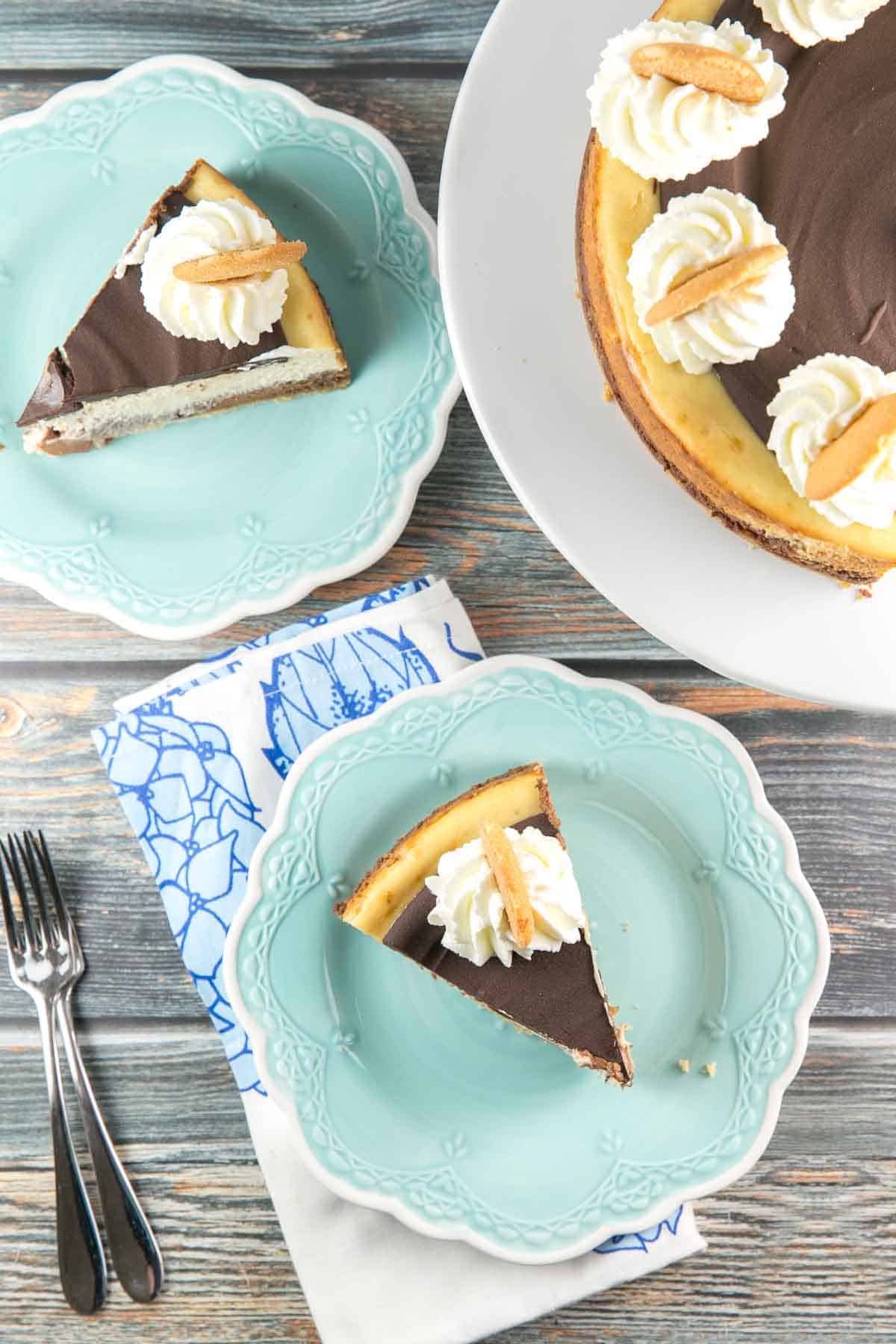 How to Prevent a Cheesecake from Cracking

But what if you want to make this without the ganache topping?  The number one reasons cheesecakes crack is because they’re overcooked.  The cheesecake continues to cook and set as it cools, so waiting until the cheesecake jiggles just a little before removing it from the oven means it’s cooked too long.  You want to pull it out when it still jiggles a lot.  You’re still looking for a 3-4 inch diameter ring in the center which is really wobbly – this is probably bigger than you think!

Or, take all the guesswork out and bake the cheesecake by temperature.  Using an instant-read thermometer, turn off the oven when the cheesecake reaches 150 °F.  No need to hem and haw over whether that wobbly spot is too big or too small.  Science: it works! 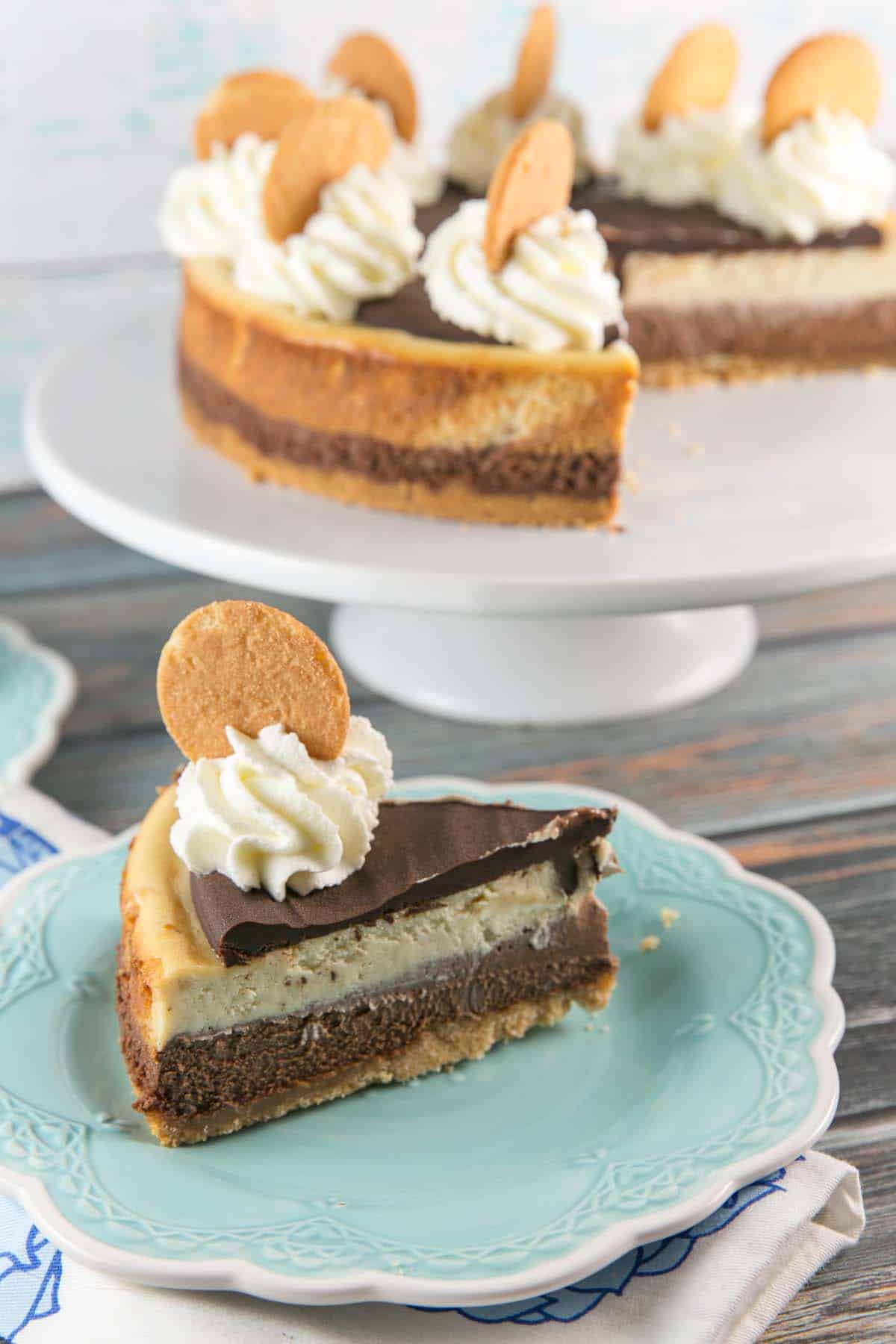 Tips for a Perfect Cheesecake

Here’s just a few tips I’ve picked up over my years of cheesecake baking to help get a perfectly smooth and creamy cheesecake every time! 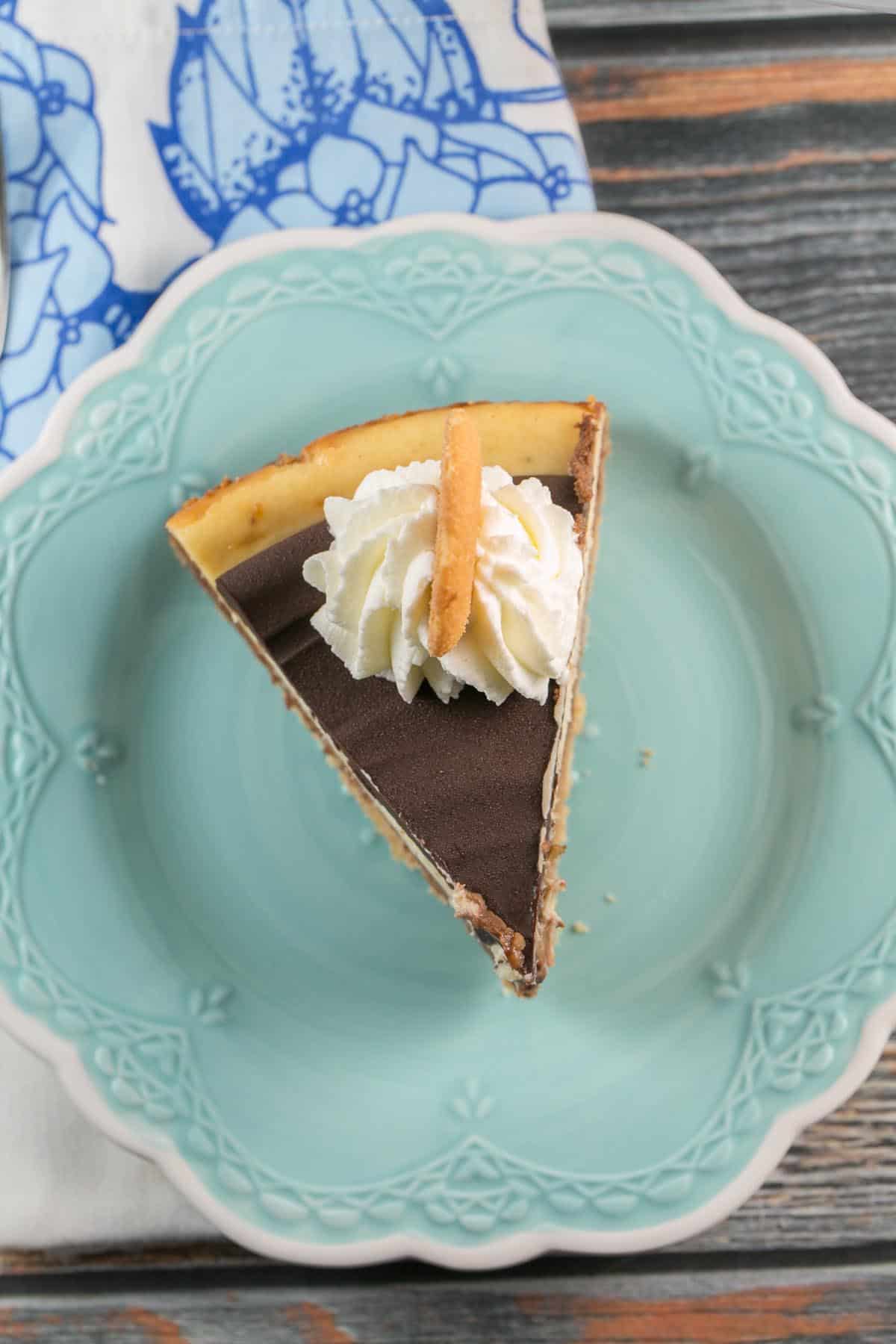 How to Make Chocolate Banana Cheesecake

Now that we have our generic cheesecake tips out of the way, let’s talk a little about this specific cheesecake!

As I mentioned above, I kept this as a layered cheesecake.  A vanilla wafer cookie crust, a layer of chocolate cheesecake, and a layer of banana cheesecake.  Once cooled, top with some chocolate ganache, and then decorate with whipped cream and extra vanilla cookies.

Because banana doesn’t tend to come out as a really strong flavor, I added some banana extract to the banana cheesecake layer.  If extracts weird you out, skip it, but just know that it may be more of a chocolate not-quite-vanilla-but-I-can’t-put-my-finger-on-it cake.  The riper the bananas, the stronger the banana flavor, and you can even roast the bananas for a little extra flavor boost!

Since I am all about saving time, I used the same base – both layers of cheesecake start off the same.  Then I removed half the batter and added the mashed bananas, mixing until just combined.  Scoop out this layer, add the other half in to the mixer, and add the cocoa powder.  Because you’re going from banana (light colored) to chocolate (dark colored), you don’t have to wash and dry the bowl in between.

But when you pour the layers, put the chocolate on the bottom.  The chocolate layer has starch (cocoa powder!), so it will be a little denser and more firm as it cooks.  We want the lighter and fluffier layer on top.  (And yes, technically a banana has starch, but by the time it is fully ripe most of that starch has converted to sugar.)

Bake the cheesecake until an internal temperature of 150 °F, then turn off the oven, prop open the door, and let it cool in the oven for 30-45 minutes before removing to the counter.  Let the cheesecake cool to room temperature, cover with chocolate ganache, and refrigerate overnight. 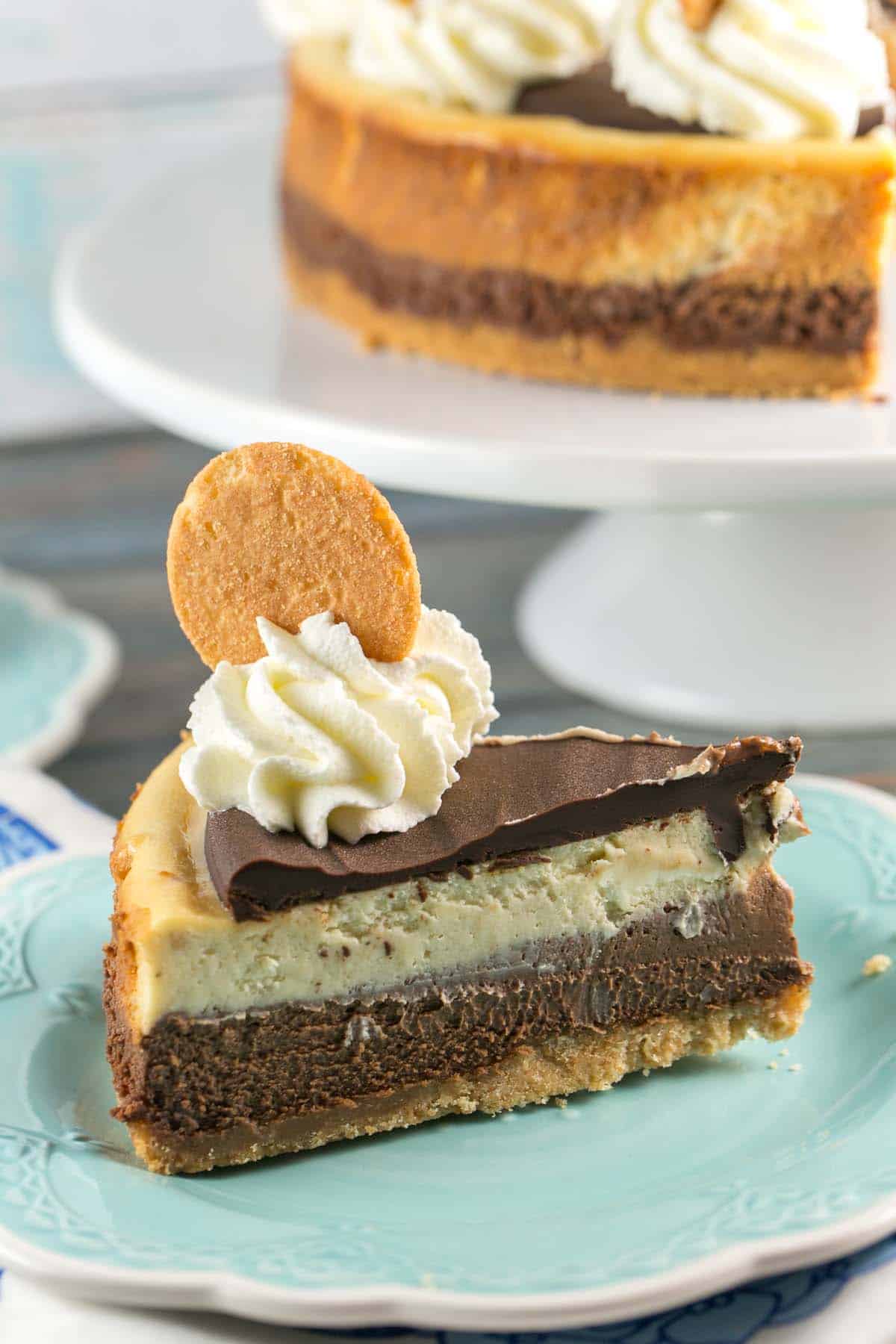 At this point, you can grab a knife and dig on it, or wrap the cheesecake in a layer of plastic wrap followed by a layer of aluminum foil and store it in the freezer.

Oh right, did I forget to mention that this creamy, dreamy chocolate banana cheesecake can also be made months ahead?  Well, it can — another reason why cheesecakes are a perfect party dessert!  Just thaw overnight in the refrigerator, add whipped cream if desired, and dessert is served. 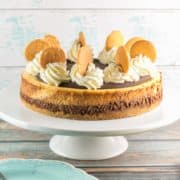 Why decide between chocolate or banana cream cheesecake when you can have both?

Cheesecake can be made ahead and frozen.  Once fully chilled, wrap cheesecake (still in pan) in a layer of plastic wrap, followed by a layer of aluminum foil.  Freeze for up to 3 months.  Thaw overnight in the refrigerator.  Individual slices can be wrapped in plastic wrap and foil and frozen sitting flat on a cookie sheet, then transferred to a freezer bag once frozen solid. 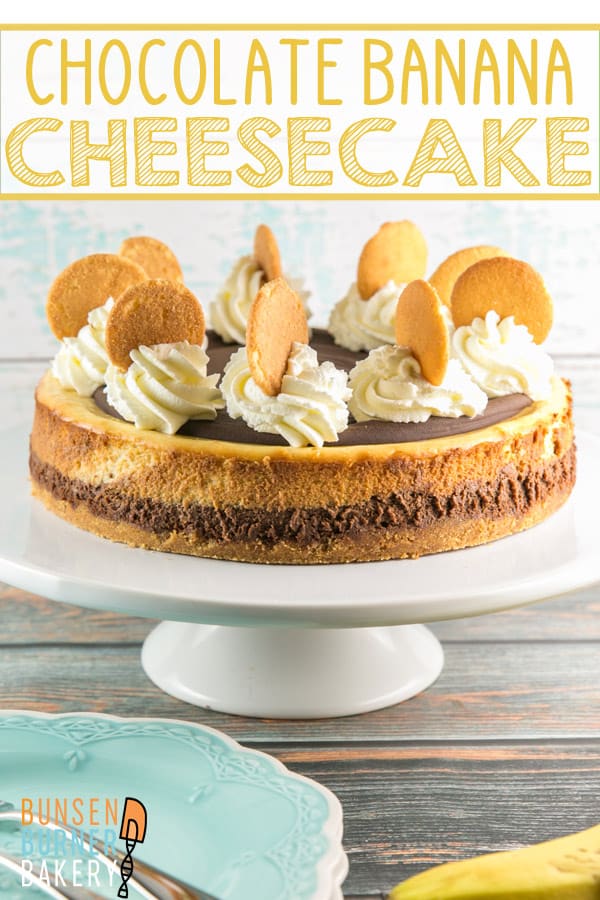 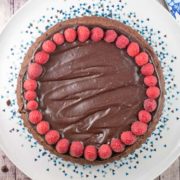 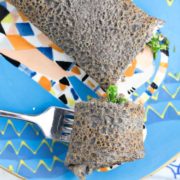 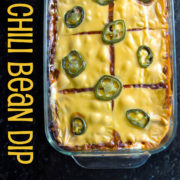