Why choose between brownies and ice cream when you can make one show-stopping dessert with both?  A thick brownie bottom with peanut butter and vanilla ice cream, topped with swirls of hot fudge and peanut butter sauce.  Don’t forget the whipped cream and sprinkles on top! 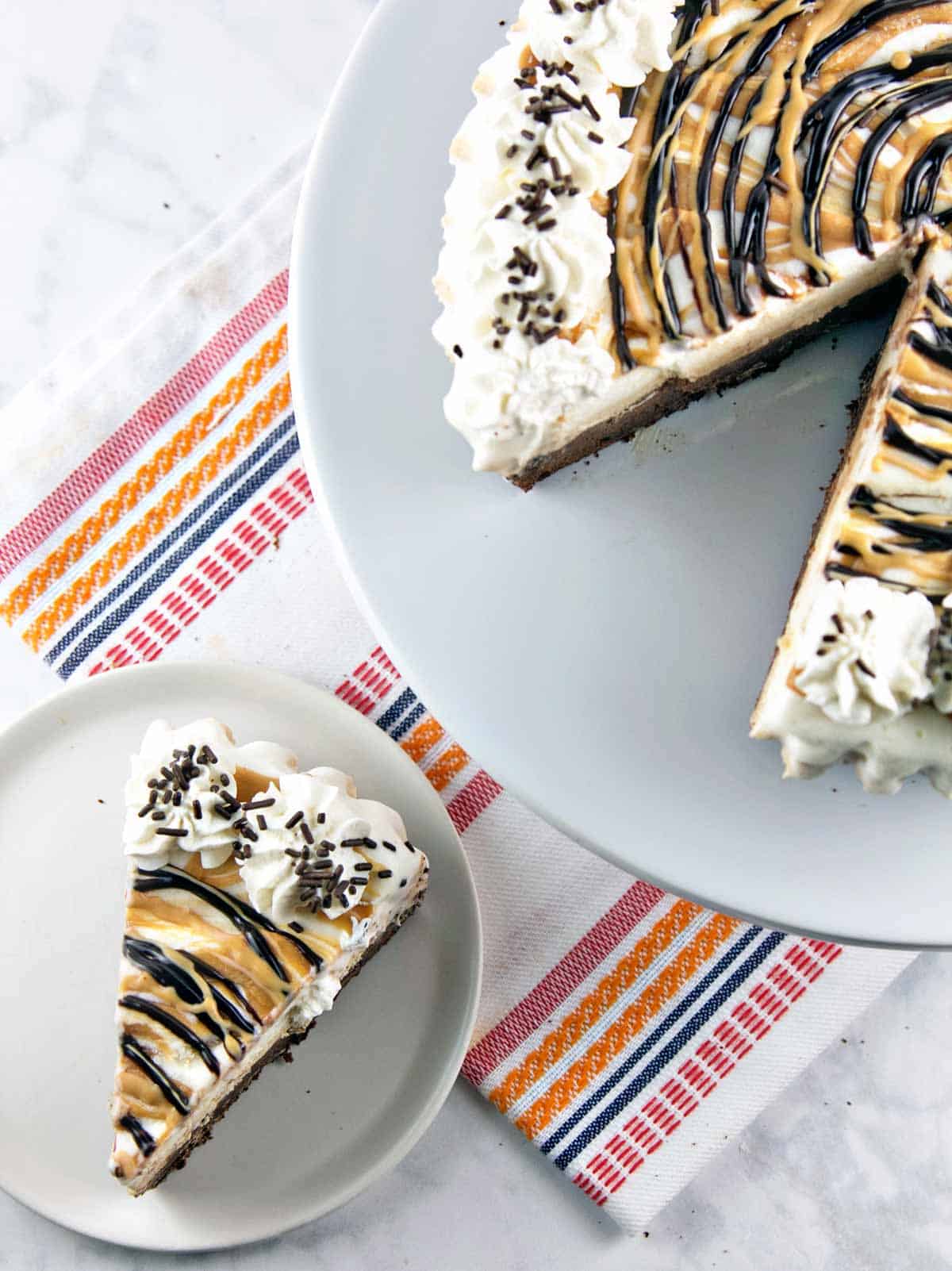 Even though Labor Day is right around the corner, it’s still summer.  Let’s not cut summer short – it lasts until September 22nd, people!  That’s nearly an entire month left to justify ice cream way more frequently than normal, because after all — it’s summer! 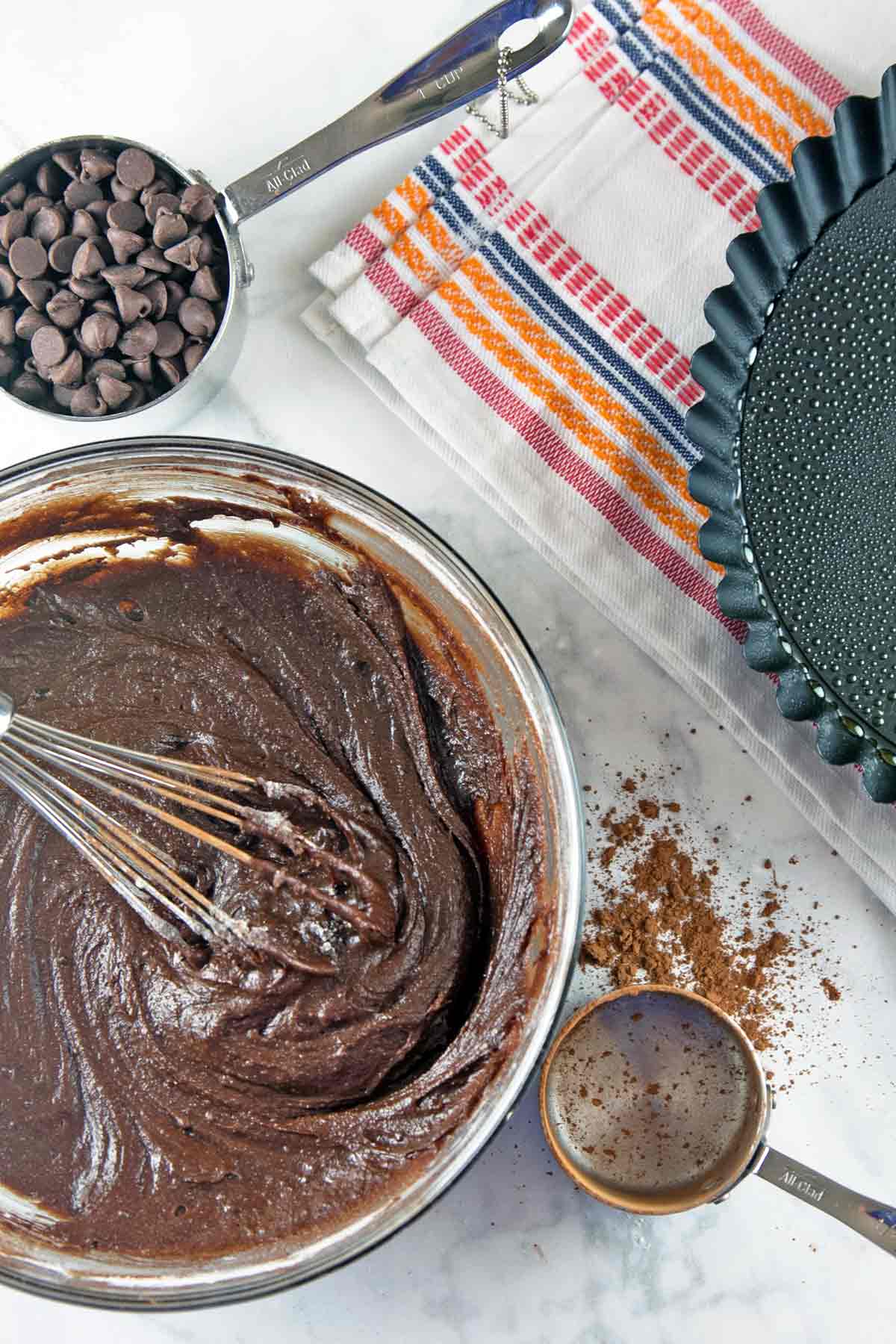 Grab a spoon (or fork, this is a pie, after all!) – we’re digging right into this deep dish brownie bottom peanut butter ice cream pie!

I love ice cream.  I love to eat ice cream. (Really, who doesn’t?)  I love to make ice cream enough that I have my own ice cream maker with a built in cooling compressor.  But I also realize that most people don’t have this at their fingertips. 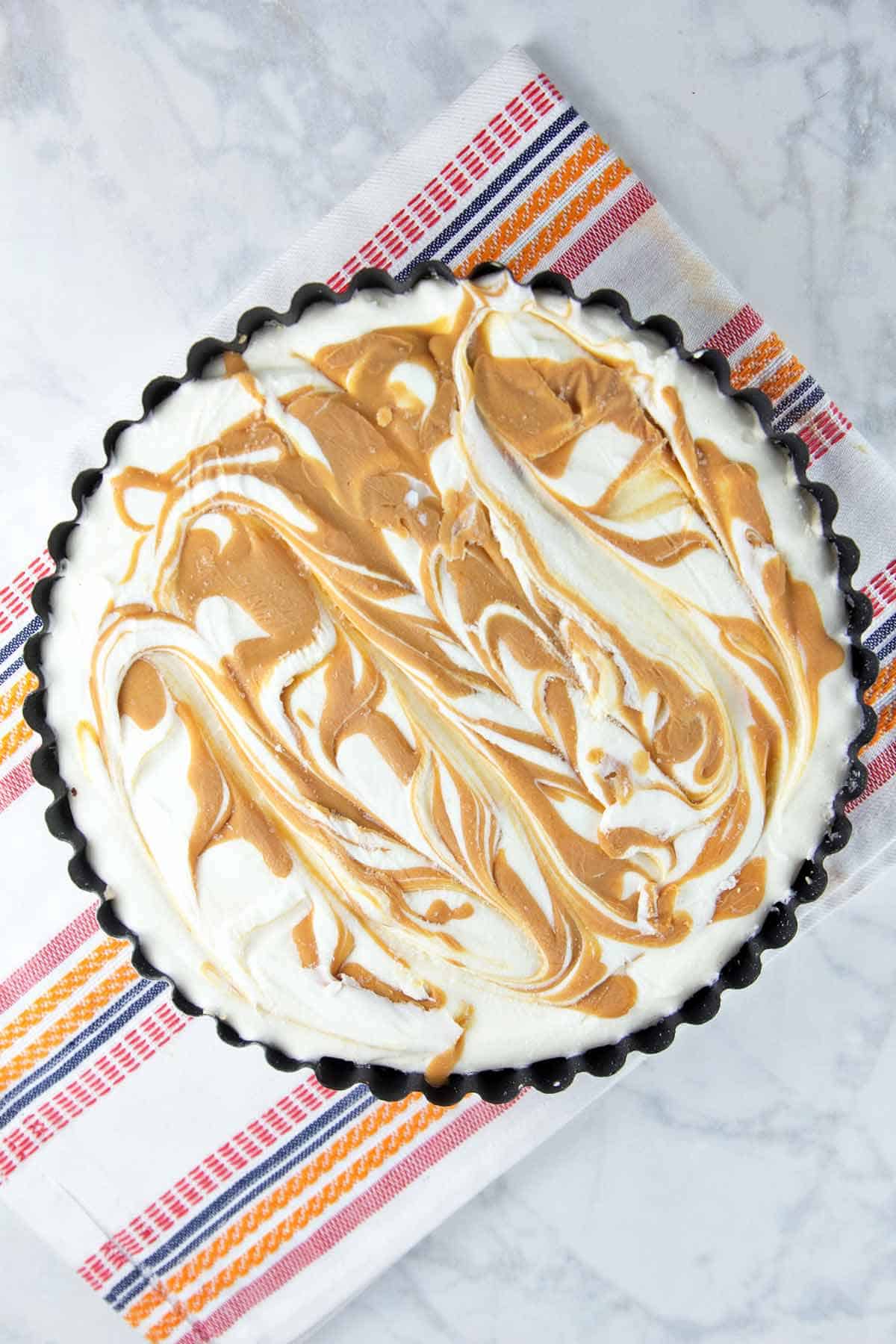 So you know what’s so great about this?  Make your own ice cream, like I do… or use store bought.  I won’t tell anyone.  And I promise, with how delicious this finished pie is, no one is going to notice.

Are you ready to make your own brownie bottomed peanut butter ice cream pie?  Let’s get started. 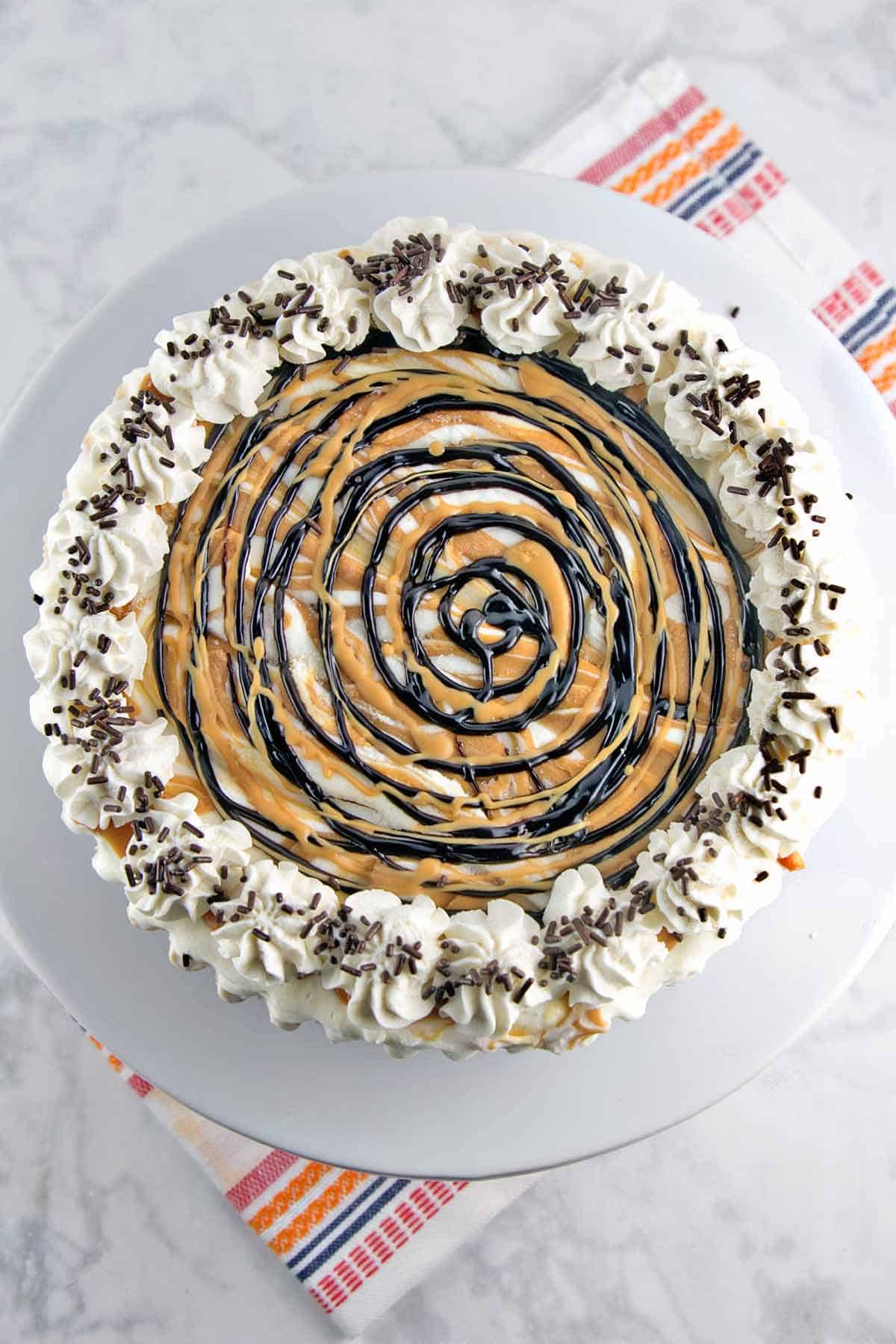 We’re going to start with a brownie base — it’s actually half the recipe of my Simple Fudgy Brownies.  I used a deep-dish tart pan because I like the look, and the bottom pops out from the sides to make serving really easy.  But you can use a springform pan or a deep dish pie plate or whatever other shape you can dream.  (Bundt cake ice cream cake? Is that a thing? Because it should be.) 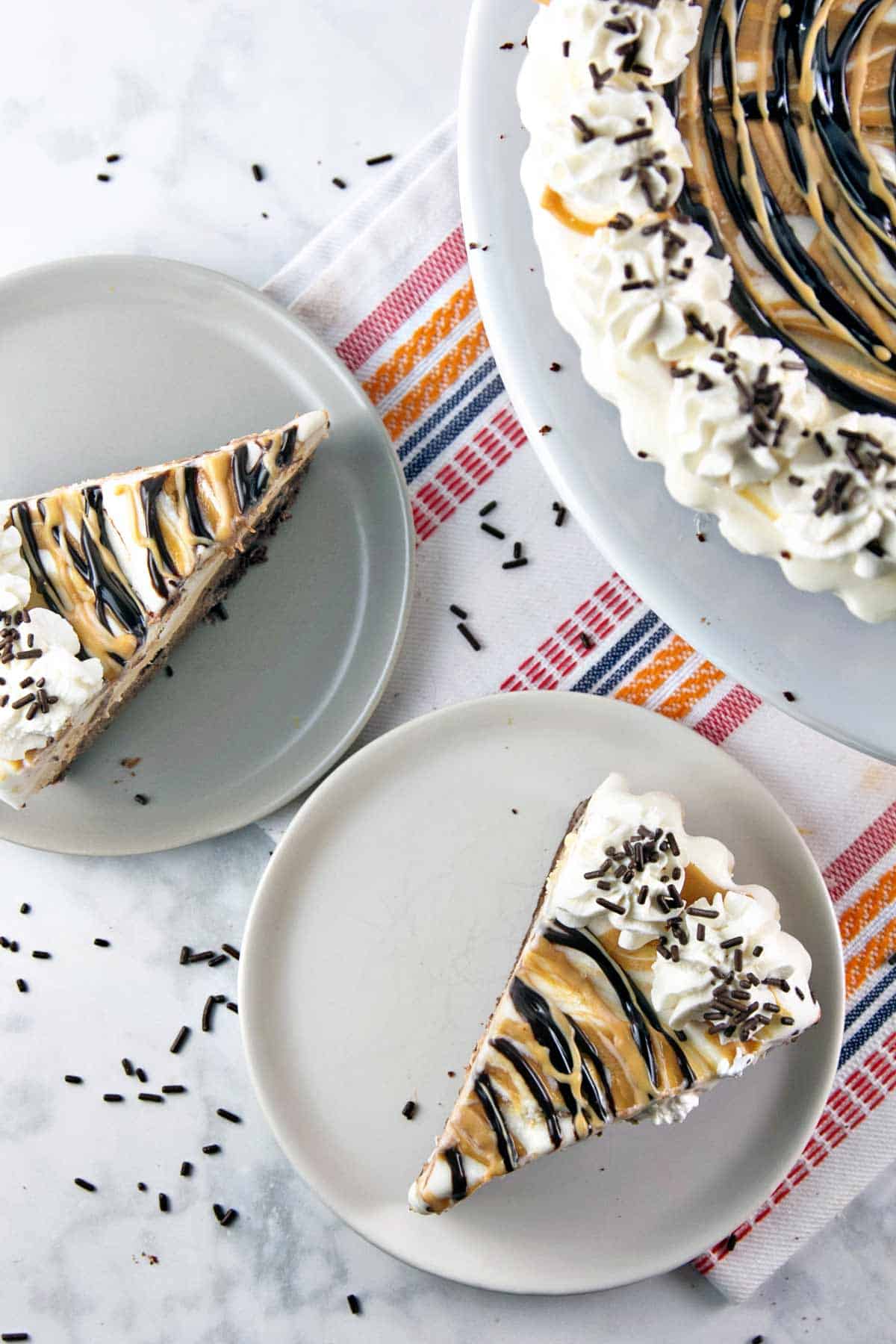 Once the brownie layer bakes and cools, it’s time to make the ice cream!  Or let the container of ice cream sit out on your counter for 15 minutes to thaw.  Much easier.

Scoop your softened peanut butter ice cream in one layer, smooth the top, then freeze for a bit.  Next up, scoop the sweet cream (or vanilla, or birthday cake, or whatever flavor your heart desires), swirl with some melted peanut butter (or not – your call) and freeze again.  Top with some hot fudge sauce, peanut butter sauce, and whipped cream.  Because what’s an ice cream pie without a heavy layer of whipped cream?! 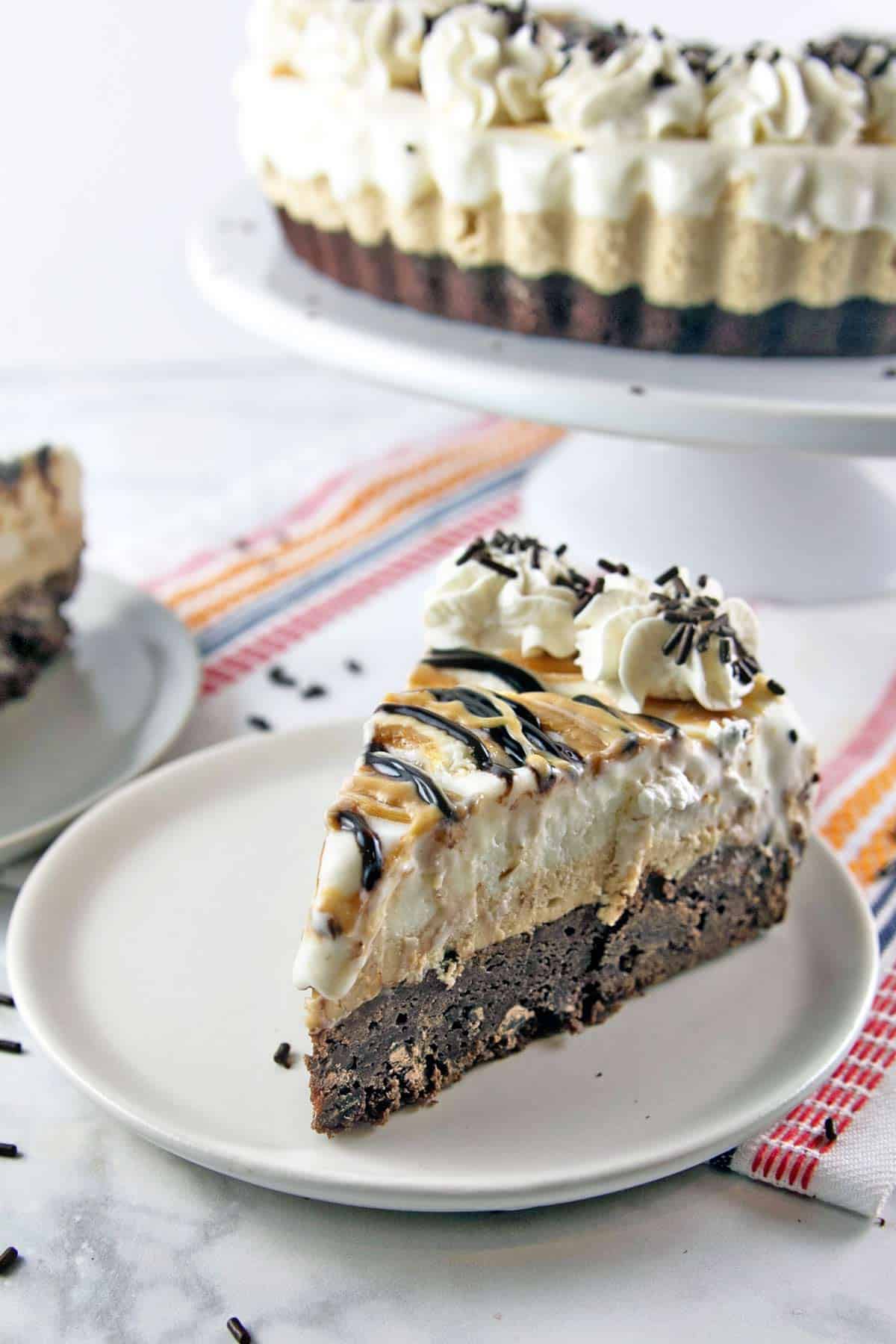 Easy-peasy. Totally delicious.  Why choose between brownies and ice cream when you can have both, in this perfectly sweet and salty dessert?  So really.. what are you waiting for?  Go make yourself a brownie bottom peanut butter ice cream pie! 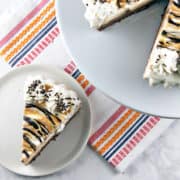 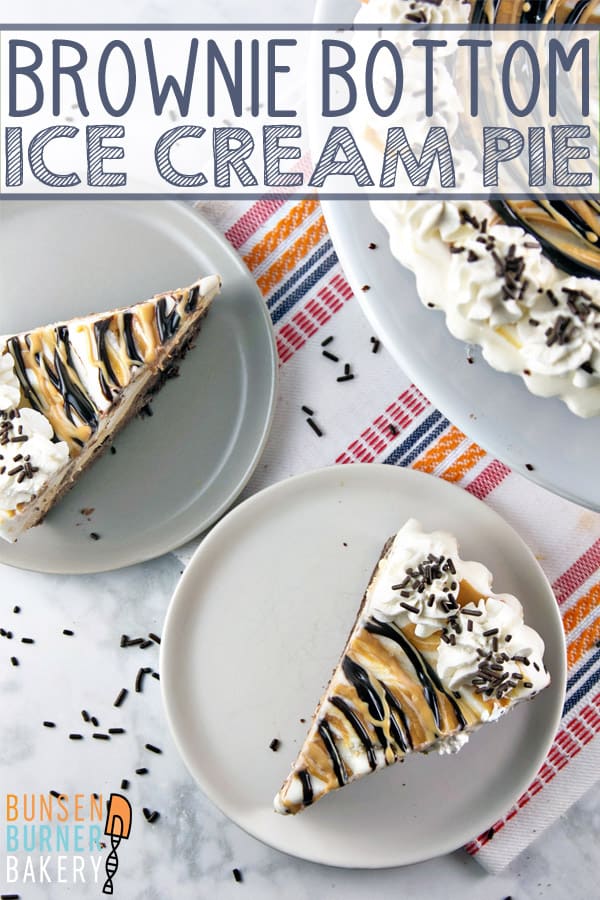 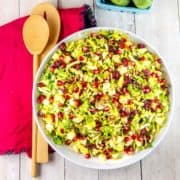 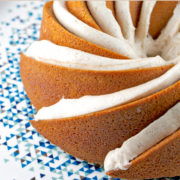 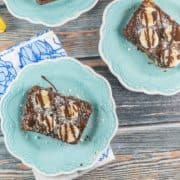