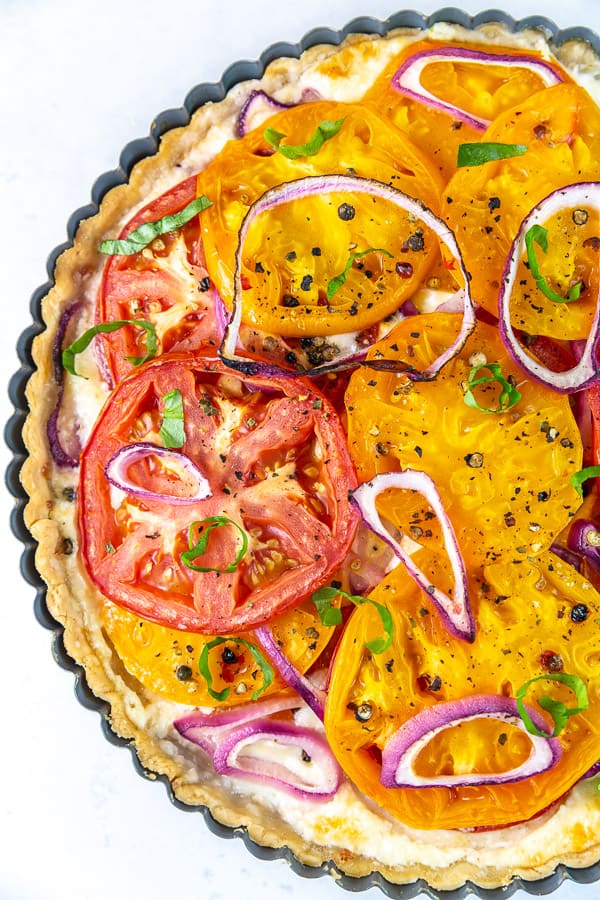 When the tomatoes first start appearing in early July, you might be humming a few verses of “It’s the Most Wonderful Time of the Year.”  In the beginning, the tomatoes come slowly and each one is savored.

Fast forward a few weeks, and you can’t keep up.  There’s only so many salads and tomato sandwiches you can eat.

While facing a tomato overload from our CSA a few years ago, I stumbled across a recipe for tomato pie.

Despite my complete lack of southern roots, tomatoes and mayonnaise are one of my favorite combinations (aforementioned tomato sandwiches).  I thought a tomato pie would be right up my alley.

Bu then… I tried it.  It was so soggy with so much mayo piled on top, it was completely unappetizing. The tomato juice ran into the crust.  The tomato flavor was lost in the pile of cheesy mayo on top.

So, I set to tweaking, resulting in a healthier, less mayo, less cheese, actually-taste-the-delicious-summer-tomatoes version of tomato pie.

It’s not so Southern anymore, but it IS delicious.  This is a great way to highlight really fresh tomatoes, and leave behind all the extra goop. 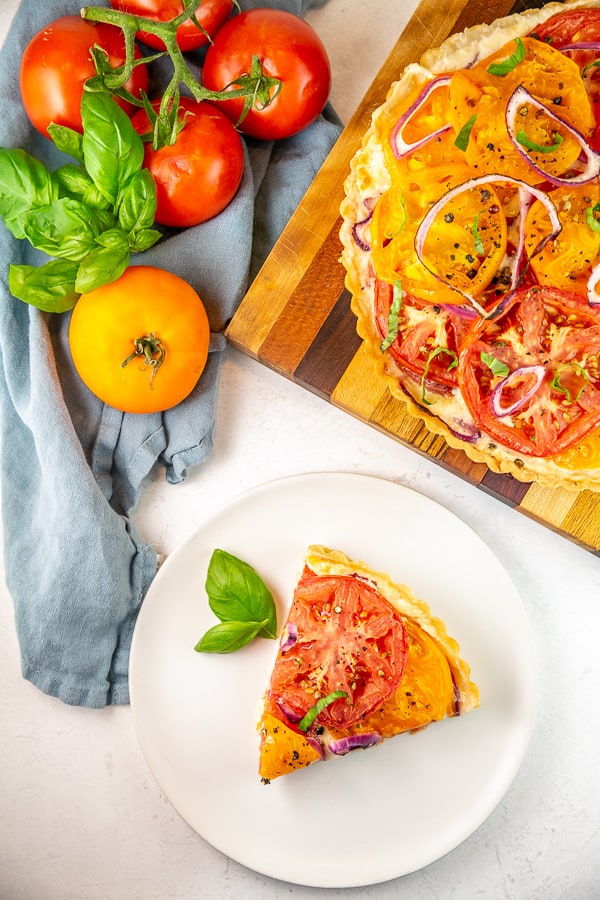 I start with my homemade No Fail Pie Crust for this recipe.  I like homemade crusts because they don’t brown as quickly as a store bought crust.  But if you’re not a crust from scratch person, a frozen crust works just fine.

I prefer to use a tart pan with a removable bottom, for ease of serving, but a pie dish also works.

Once you’ve pressed the crust into your tart pan or pie dish, poke some holes in the dough with a fork.  Cover with a layer of parchment paper and some pie weights (or dried beans).  Blind bake the crust for 15-20 minutes, or until just starting to get a little brown.

Blind baking the crust will help retain a crispy crust, despite all the moisture in this tomato pie. 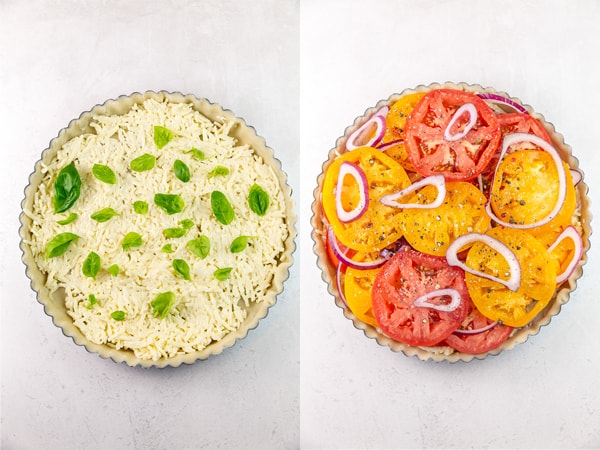 We’re making this pie upside-down compared to more “traditional” Southern tomato pies.  Instead of putting the mayo and cheese on the top, we’re putting it on the bottom!

The heavy topping won’t weigh down the tomatoes, and I think tomatoes on top are just prettier – this pie is about the tomatoes, not mayo and cheese!

Buuuut since a pie of nothing but crust and tomatoes would admittedly be a little bland, we’ll put a little mayo + cheese + basil layer on the bottom. 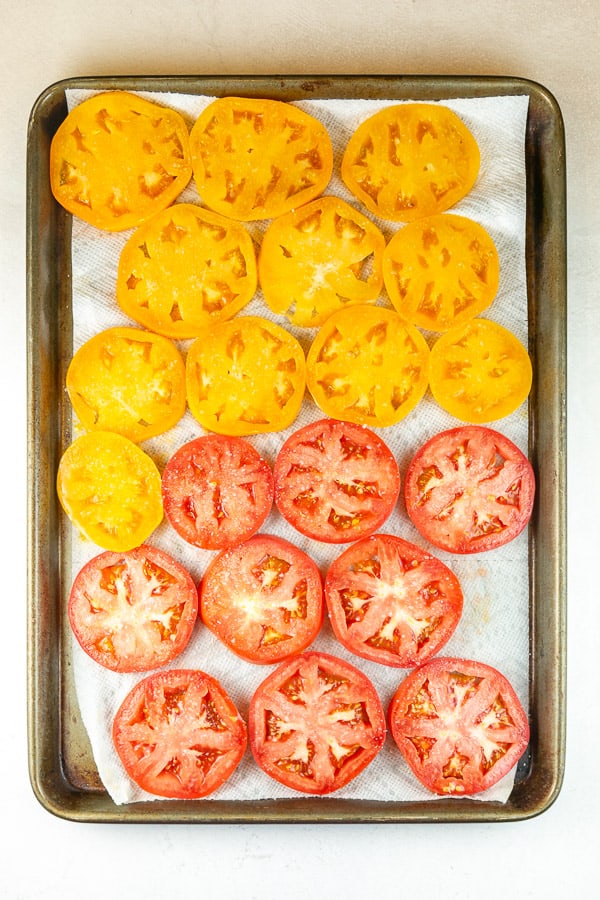 Since this pie focuses on fresh summer tomatoes, let’s talk about what kind to use.

Use medium-to-large tomatoes (not cherry tomatoes) — we want more interior tomato than skin.

You’ll also want to use firmer tomatoes.  Soft, juicy tomatoes release a little too much juice, and will make your pie soggier.

I find Roma tomatoes work best because of their lower water content, but I’ve made many a tomato pie with big heirloom tomatoes, too – just draw out any extra juice first!

To do this, start by salting the tomatoes, which will prevent a soggy tomato pie.  Why?  It’s time for my favorite subject… kitchen chemistry!

Salt draws excess moisture out of raw vegetables through a process called osmosis.  Water will always flow through cell walls from an area of more dilute solution to an area with a higher concentrated solution.  By sprinkling salt on the outside of the tomatoes, we create a higher concentration of particles on the surface of the tomato, which draws water out.

Slice your tomatoes, sprinkle with salt, and let them sit for 10 minutes.  Then blot off all the tomato juice with paper towels. 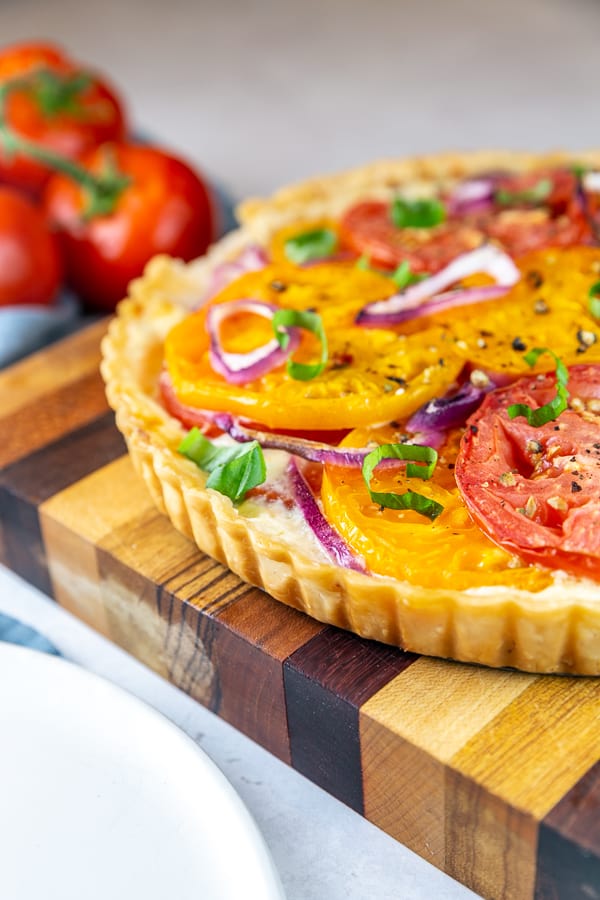 Tips and Tricks for The Best Tomato Pie

Tomato pie is best served on the day it is made, but leftovers can be stored in the refrigerator and reheated in the oven at 350 °F for 15-20 minutes. 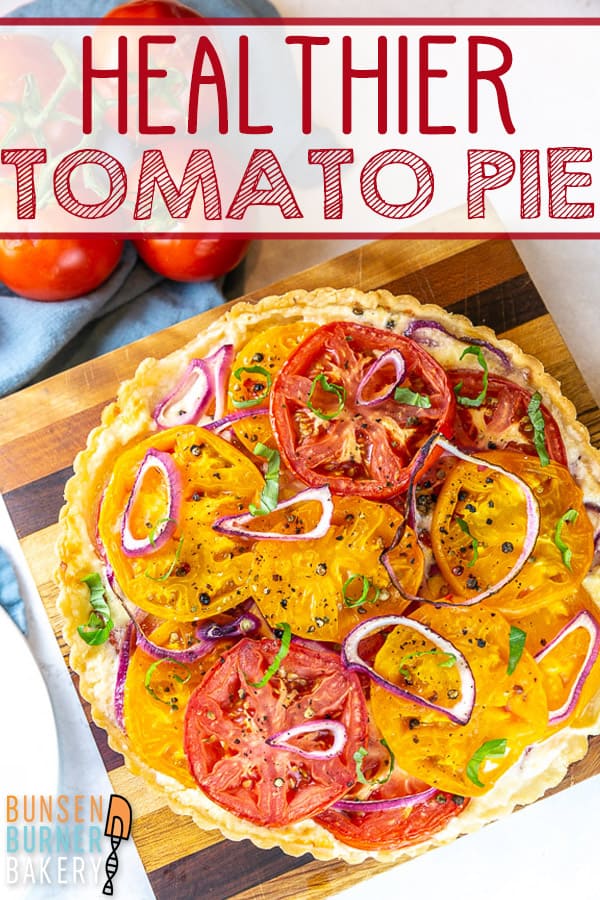 This Healthier Tomato Pie recipe was originally published on 09/08/2014 and was republished with updated pictures, text and recipe tips on 08/14/2020.