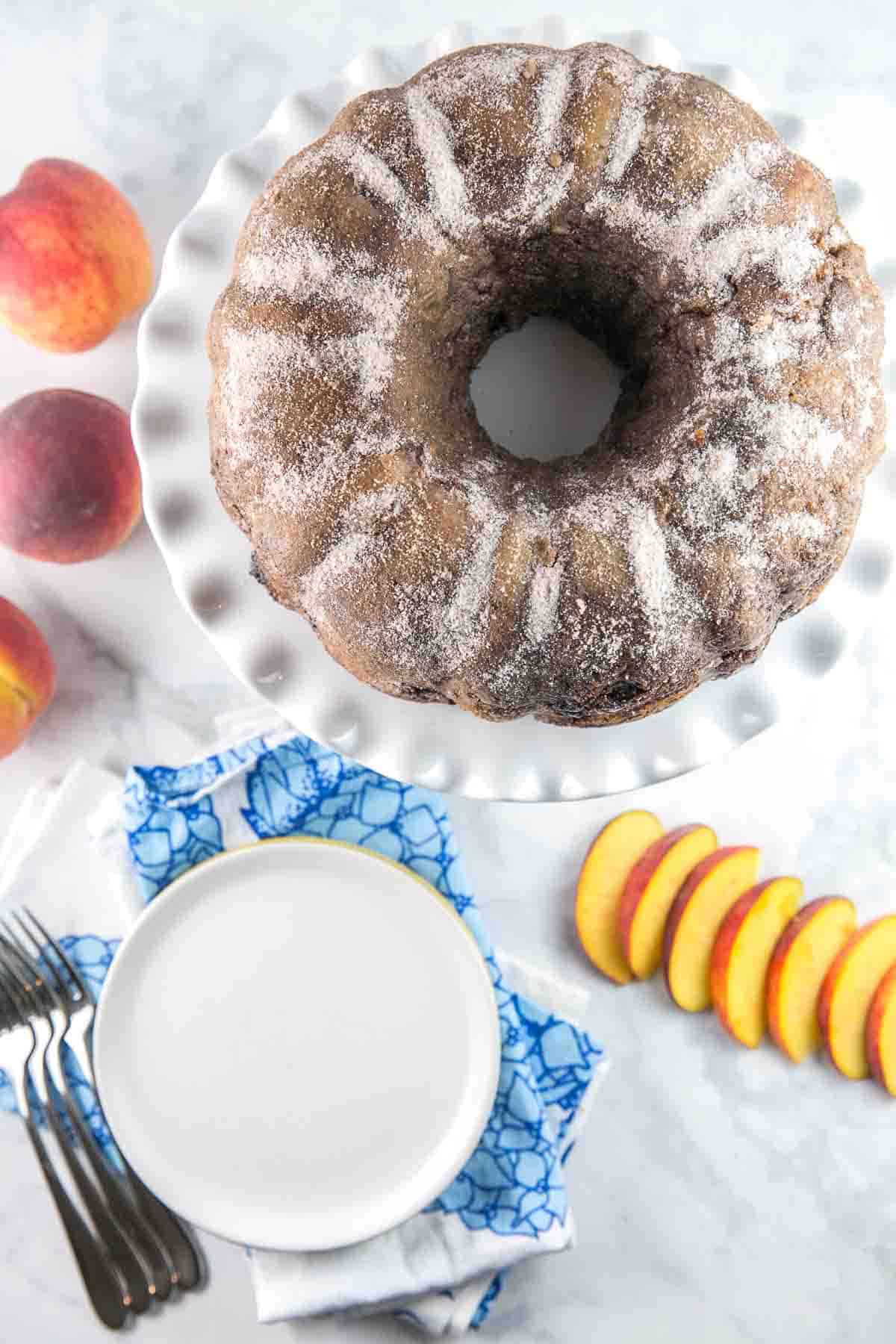 We are, sadly, approaching the end of peach season, which runs from late July through early September, here in the mid-Atlantic.  I couldn’t let the summer go past with at least one peach-filled dessert, and this one.. well, this takes the cake.  The bundt cake, to be precise.

The idea behind this cake came from the need to make a dairy-free dessert for someone with an extreme dairy allergy.  It’s generally really easy to substitute in a nut or soy milk for dairy milk, but that.. you know… requires actually purchasing said faux-milk.  I am all about using what I already have on hand!

One of my most-made recipes is an amazing Jewish apple cake.  There’s actually nothing “Jewish” about an apple cake (it’s actually probably Pennsylvania Dutch in origin), but rumor has it that it inherited the Jewish designation because it’s dairy free, and thus a popular Kosher dessert. 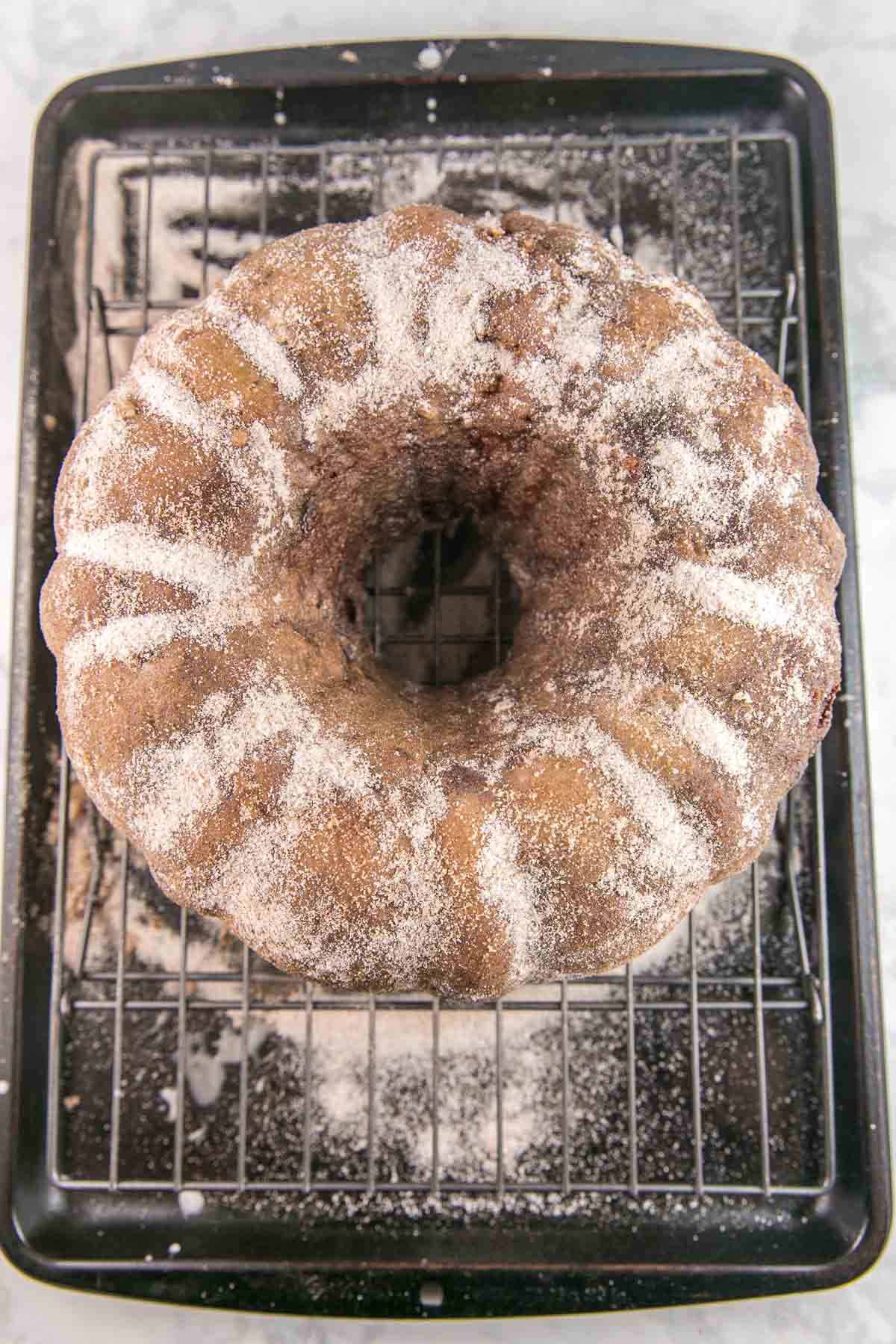 How to Make Peach Bundt Cake

Just as I suspected, the transition to a peach bundt cake worked beautifully.  Just a few simple modifications necessary.  Peaches (especially perfectly ripe end of summer peaches!) are a lot juicier than apples, so we’ll drain off some of the juice first. But! Don’t discard it — we’ll use the juice to coat the outside of the cake.

The rest of this cake is super easy.  It’s mixed together in one bowl by hand.  Because it uses vegetable oil instead of butter, there’s no need to bring ingredients to room temperature beforehand.  Since we’re not using any milk in this dairy free cake, we’ll use a little juice for moisture.  Peach juice helps play up the peach flavor even more, but like I said earlier: I’m all about using what you have on hand.  Orange juice works fine.  Apple juice would, too!

When we pour the cake into the bundt pan, do it in three layers.  Batter, peaches, batter, peaches, batter, peaches.  The peaches are heavy and will sink to the bottom, which becomes the top when you flip the cake.  Adding them in layers ensures peachy deliciousness in every bite.  Even though we’re going to end with peaches on top, the batter will rise up around them, giving us a layer of cake on the top of the bundt pan (which then becomes the bottom when we flip it) so there’s a nice flat surface for the peach bundt cake to sit on. 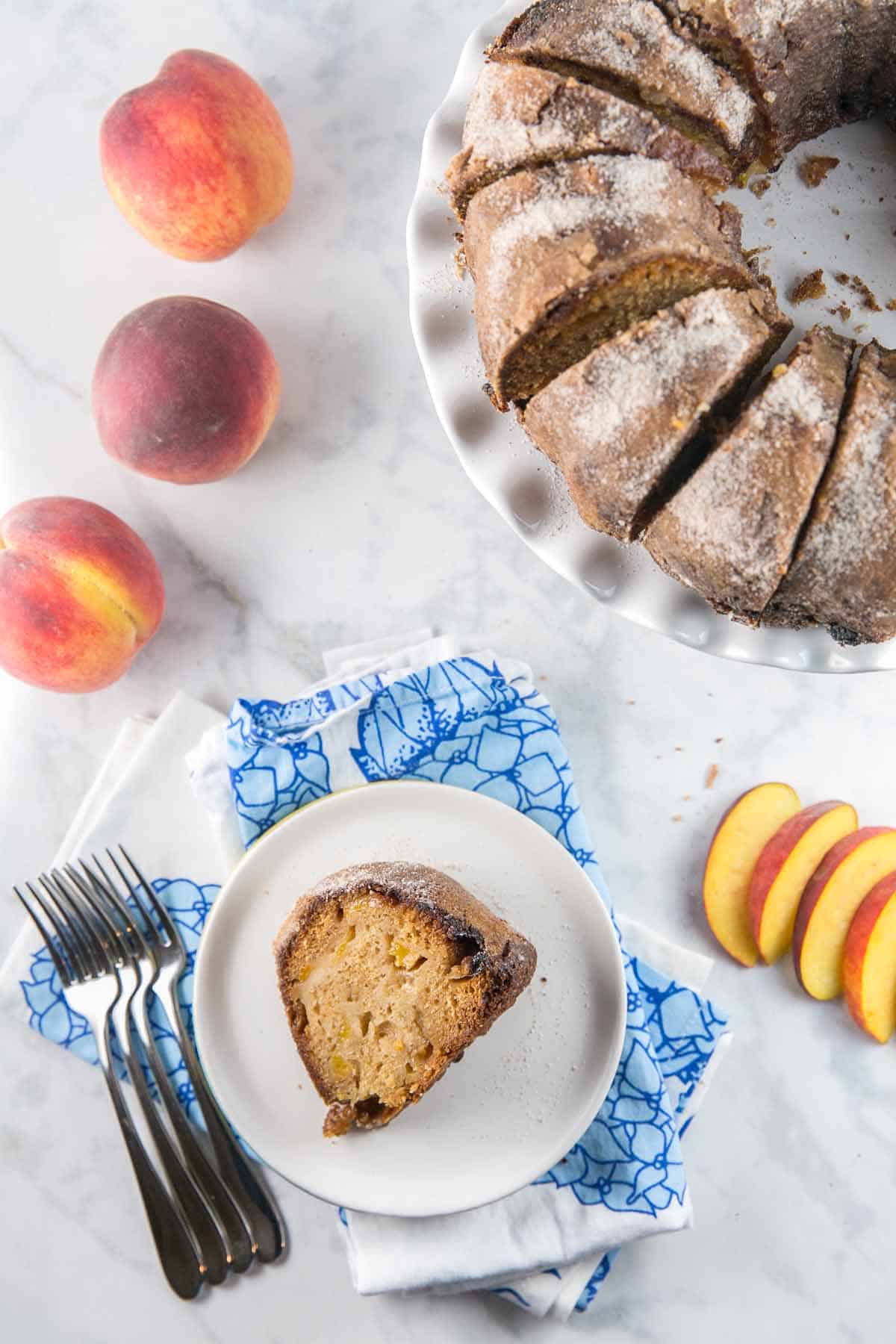 How to Make a Sugar Crust on a Bundt Cake

I’ve made an awful lot of bundt cakes, but all have some sort of frosting or glaze.  Frostings usually involve butter, while glazes are usually made from confectioners sugar with milk.  It would have been easy enough to use vegetable shortening or juice, but I wanted to try something different: a cinnamon sugar crust. 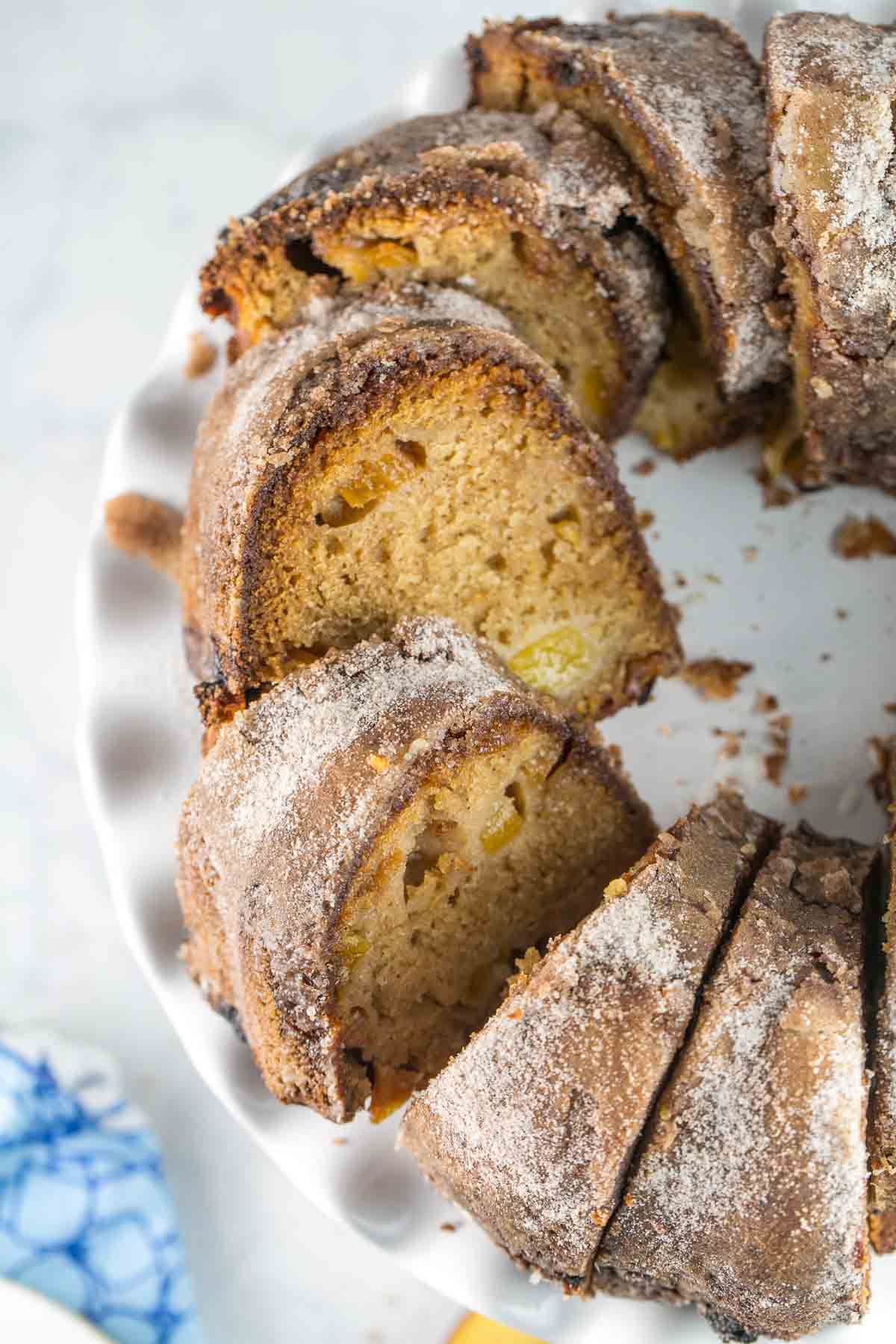 But what I really wanted was a hard, crunchy, cinnamon sugar shell.  If we’re skipping the frosting or a traditional glaze, let’s really play up the crispy outside of a bundt cake.  How do we make this work?  It’s time for a a little… kitchen chemistry!

We’re all familiar with sugar for its sweetness.  Adding sugar to a cake makes it delicious!  But sugar also creates the shiny, crackly crust on top of brownies and cakes.  While a cake bakes, moisture evaporates from the surface, which causes the sugar to re-crystallize.

But this on the top of the cake, and the top of a bundt cake is what bakes on the bottom.  The top of a bundt cake touches the bottom of the pan, however, which gets really hot.  If you coat the bundt pan itself with a thick layer of cinnamon sugar, it will start to melt and dissolve, and then cool again after you remove the cake from the oven, making that delicious crunchy crust. 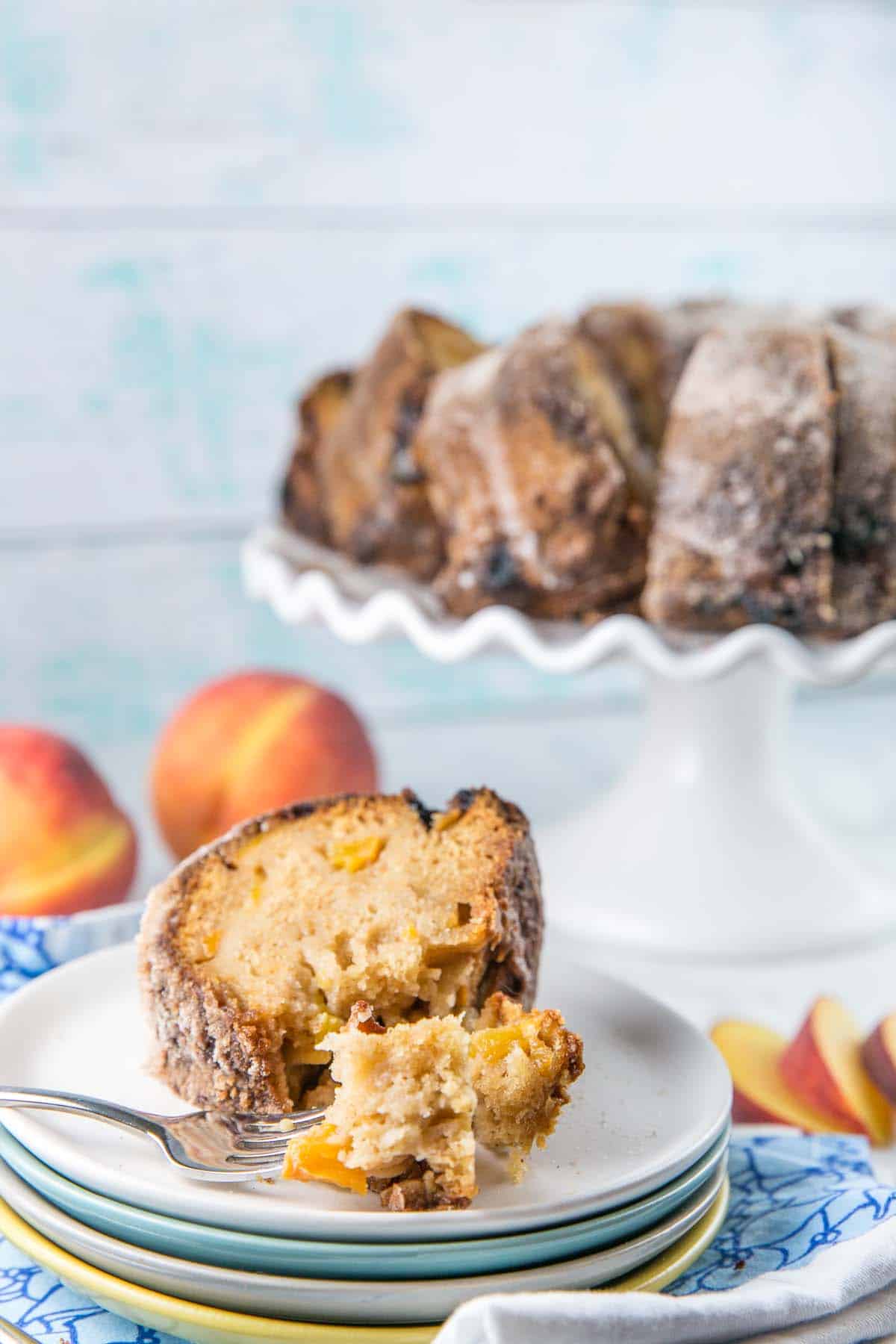 Two things we have to keep in mind. (1) It’s important to use vegetable oil rather than melted butter for this.  Butter has a high water content (~16-20%) and the sugar will dissolve into the butter, and thus into the batter. (2) The cinnamon sugar layer has to cool back to a solid crust before removing from the bundt pan.

The crunchy cinnamon sugar coating worked perfectly, and is delicious.  (I wound up bringing the majority of this cake to my lab, and a few of my coworkers commented on how much they liked the crunchy outside.)  But in all honesty, it wasn’t the prettiest – once the sugar melts a little, it loses some of the ‘sparkle.’

So remember that peach juice we saved?  We’re just going to go ahead and brush a little bit of it right on top of the cake and dust some additional cinnamon sugar on top.  Talk about the best of both worlds. 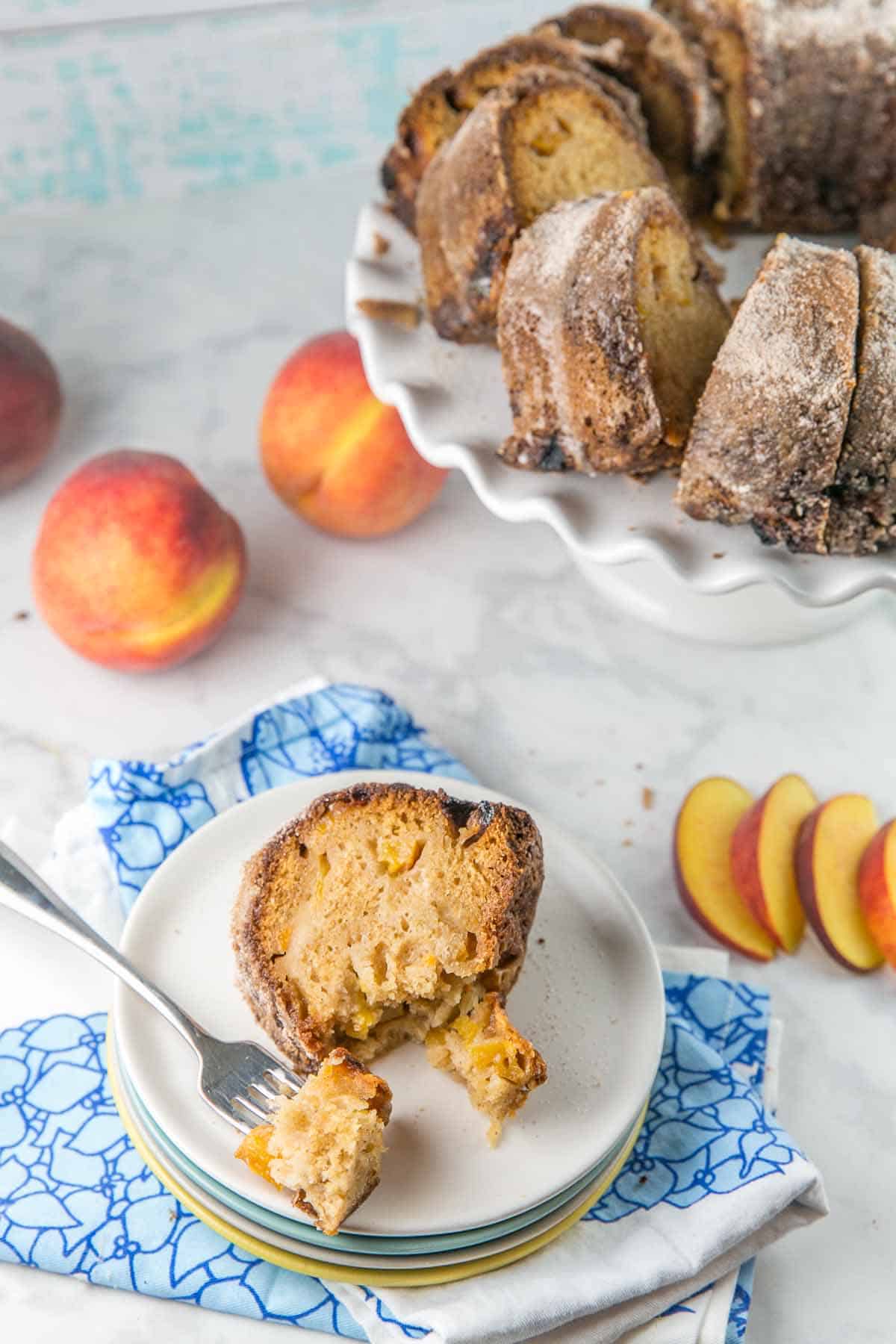 This cinnamon sugar peach bundt cake might be my new favorite summer dessert.  Or breakfast.  I mean, it has fruit, so obviously it’s a totally viable breakfast choice, right? ?

**Before starting this recipe, check out all my tips on making a perfect bundt cake –>HERE!!**

For the cinnamon sugar coating: 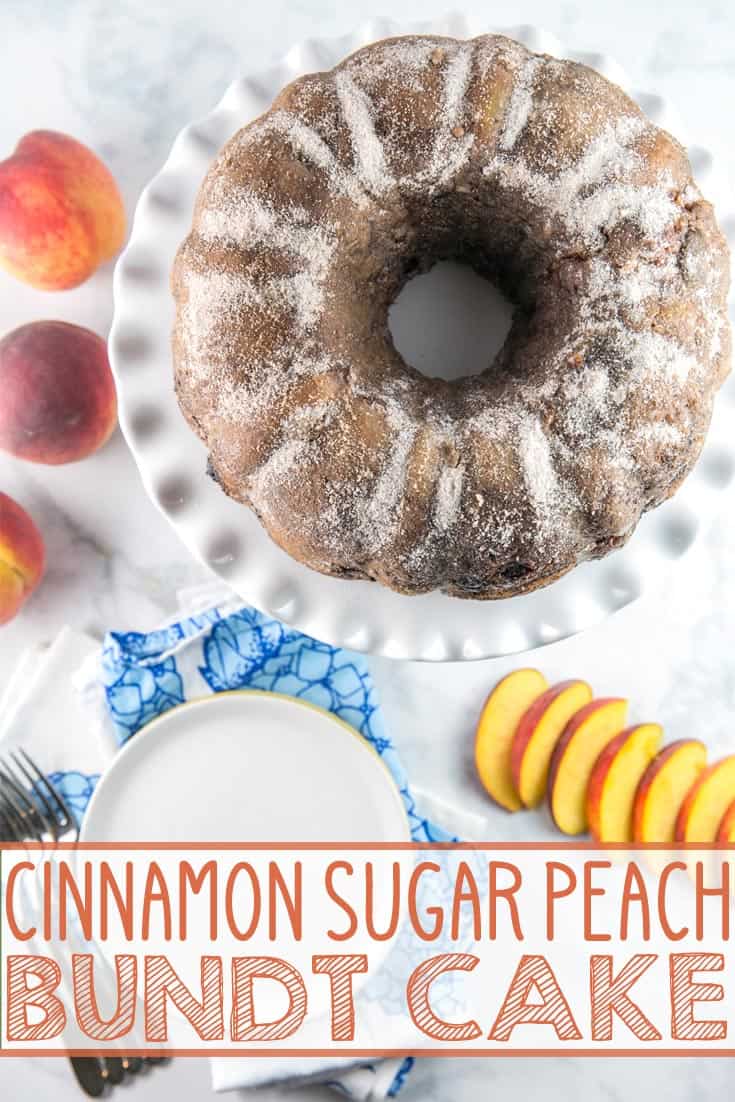 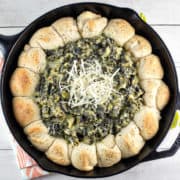 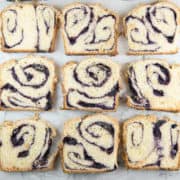 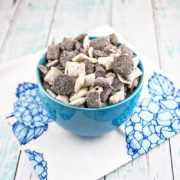