Dark and rich, this Triple Chocolate Pound Cake is a true chocolate lover’s dream!  With the slightly dense texture and fine crumb of a classic buttermilk pound cake, a deep chocolate flavor, and a thick layer of chocolate ganache, this is a cake ready for a celebration.

Both my children have birthdays in early-to-mid April.  Unfortunately for them, this means their birthdays will often fall during Passover — meaning less than desirable birthday cakes.

So to combat this, we also celebrate their half birthdays with, obviously, half a cake!

(As far as what to do with the other half? Share with friends! Give to neighbors! Freeze for later! But for the true half birthday experience, we only present them with half of a cake on their half birthdays.)

This year, my daughter celebrated with half of this apple cider donut cake for her 1 ½ birthday.

My son, however — well, he doesn’t let me experiment with flavors as much.

His half birthday always falls during our annual October shore trip with our college friends.  This triple chocolate pound cake came along in the car and everyone shared in his half-birthday tradition.

One of the reasons I chose to do a pound cake, instead of a traditional cake?  Pound cake tastes even better a few days after it’s made.

It’s the perfect make-ahead cake for parties, potlucks, or packing up the car and going on vacation.

And as for the chocolate-loving half-birthday boy?  He was delighted because after all, this is a triple chocolate pound cake.

Cocoa powder for a chocolate cake base, chopped chocolate mixed into the cake, and a decadent chocolate ganache glaze on top.

In other words, this is a cake for true chocolate lovers, even the 4 ½ year-old kind.

Traditionally, pound cake gets its name because the cake used to be made with a pound each of butter, sugar, eggs, and flour.  Easy to remember and easy to bake!

It’s thought that pound cakes were the first cakes baked without yeast, thus paving the way for the style of cakes we enjoy today.

Somewhere in the 20th century, we started adding leaveners to pound cake, but just a little — after all, a pound cake is known for its more dense texture and fine crumb.

This triple chocolate pound cake doesn’t adhere to those traditional “pound each” ratios, but the end result has a classic pound cake texture with a super chocolatey flavor.

Forget the melted chocolate – cocoa powder is the real superstar in your pantry… if you know how to use it correctly.

For this triple chocolate pound cake, we’re going to start by adding a little boiling water to our cocoa powder and stirring to make a thick paste.  This will hydrate the cocoa powder and help it dissolve better.

Next, we’re going to add in some just-barely-warmed buttermilk (because a buttermilk chocolate pound cake is the best pound cake!).  Buttermilk does not like to be heated, thanks to the lactic acid.  Lactic acid starts the curdling process, and adding too much heat too quickly will fully curdle the buttermilk.

I usually microwave the buttermilk for 20 seconds at 30% power, stir gently, and stick in a finger to see if it’s warm.  We don’t want to exceed 90° F.  If it’s not warm, repeat once or twice more.

Once the buttermilk is between 80-90° F, gently stir it into the cocoa powder paste to form a chocolatey liquid, which we will pour in with our liquid cake ingredients.

I opted to cover the cake with an easy chocolate ganache.  The slightly soft, barely chewy ganache adds a perfect texture contrast to the cake.

Since this cake came on the road with us, we served it with no other accompaniments.

But if I was making this at home, it would be delicious with a big dollop of whipped cream, a scoop of vanilla ice cream, or sliced strawberries!

Not into the chocolate ganache? Skip it altogether and have a double chocolate pound cake, and dust with a little confectioners sugar instead.

Tips and Tricks for The Best Triple Chocolate Pound Cake

The pound cake can be stored at room temperature for up to 5 days (and tastes even better after sitting overnight). Leftover cake can be frozen for up to 3 months. To freeze a full cake, wrap the plain cake (no ganache) in plastic wrap and a layer of aluminum foil. Thaw completely, then add ganache before serving. To freeze individual slices, freeze on a sheet pan for a few hours, then wrap in a layer of plastic wrap and store in a freezer bag. Unwrap before thawing. 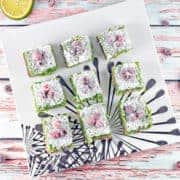 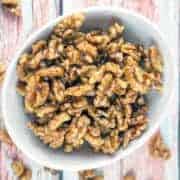