Make a double batch of this easy, hearty, gluten free Pumpkin Soup with Sausage and Black Beans – leftovers freeze perfectly for the future!

Figuring out what to call this recipe is, by far, the hardest part about making it. (Which is to say, it’s very easy to make and comes together quickly!)

As you can see by the photos, if you choose to simmer it on the stove for a while, there’s not a lot of broth left over, making the pumpkin soup title controversial.

My husband thought it was more of a pumpkin chili, but usually the defining characteristic of a chili is the inclusion of some sort of chilies or chili powder, which this does not. Also, it includes 3 cups of chicken broth, which typically doesn’t go into a chili.

I considered pumpkin stew, but stew has large chunks of meat, and this doesn’t.

So eventually I circled back around to pumpkin soup with sausage and black beans, again, with the caveat that if you simmer for a while, it’s not very brothy. Prefer more broth? Simmer for a little less time, or add an extra coup of chicken broth.

Whatever you call it and however much liquid you prefer to keep in it, it’s quick, easy, makes easily freezable leftovers, and is the perfect way to warm up after this brutal winter we’ve been having.

I am usually not a big soup person, but things I do like about this soup:

It also freezes really well.  If you’re going to make soup, you may as well make a double batch and freeze some for later, right?

The sausage and black beans add some heartiness to the soup, while the creamy pumpkin and warmth of the cumin make it flavorful and interesting enough to eat as your main course.

Add Milk to Soup Without Curdling

The recipe lists coconut milk or regular whole milk as options to add to the soup. I like the flavor and creaminess of coconut milk in pumpkin soup, but it’s not an ingredient we always have on hand. Whole milk works just fine, too!

Even though coconut milk doesn’t contain dairy, it can curdle when heated quickly, just like dairy milk.

What’s the best way to prevent milk or coconut milk from curdling when we add it to soup? It’s time for my favorite subject… kitchen chemistry!

The protein. molecules in milk (coconut or dairy!) are usually held together tightly, but as heat is added, the molecules lose their shape and unwind, a process called denaturing.  These proteins are more likely to collide with other proteins and form bonds with each other, resulting in the clumps we see when something curdles.  To prevent curdling, heat the soup at a slow simmer to minimize the heat impact on protein structure.  Stir the soup continuously while heating, which helps to break up the bonds between the protein molecules as they form.

Can you use canned pumpkin for this recipe?

Absolutely – having made fresh pumpkin puree, I don’t think it’s worth the extra effort to make it yourself. Just make sure to use canned unsweetened pumpkin puree and not pumpkin pie filling!

What can I substitute for the sausage?

A great non-pork alternative is half a pound of shredded chicken thighs.

What’s the best chicken broth to use?

My favorite non-homemade option for broth is a jar of Better than Bouillion.

What should I serve with pumpkin soup?

This Pumpkin Soup with Sausage and. Black Beans recipe was originally published on 01/21/2016 and republished with new photos and helpful tips on 02/19/2021. 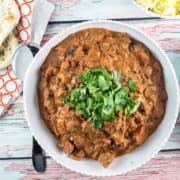 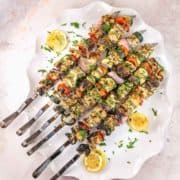